BANGKOK — Measures to protect the public from COVID-19 have transformed daily life in Bangkok, as elsewhere. But the food and beverage industry, its survival threatened by a ban on on-site dining, is fighting back with a wide range of emergency strategies.

Restaurants have been hit hard by the pandemic, which has slashed tourist arrivals as well as stopped locals going out to dinner: International visitor arrivals plunged by 91.15% in the first 20 days of March, compared with the same period a year earlier, according to the Association of Thai Travel Agents.

While no one questions the sagacity of a government decree restricting food sellers to takeout and delivery, many businesses feared they would collapse without on-site dining. Some went into fire-sale mode, offering perishables from live lobsters to wheels of French cheese at bargain prices.

Others had already turned to delivery services for new sources of revenue. While ordering cooked food from street stalls and food courts is routine in the Thai capital, it is unusual to see the multicourse menu of a two-star Michelin restaurant in takeaway containers.

Chef Chumpol Jangprai of R. Haan offered his elaborate Thai dinner for home delivery in 19 individual packets and trays ranging from the amuse-bouches to petits fours, along with a detailed list of instructions, color-coded tags for serving the dishes at room temperature or gently reheating and — virus oblige — hand sanitizers for each guest. 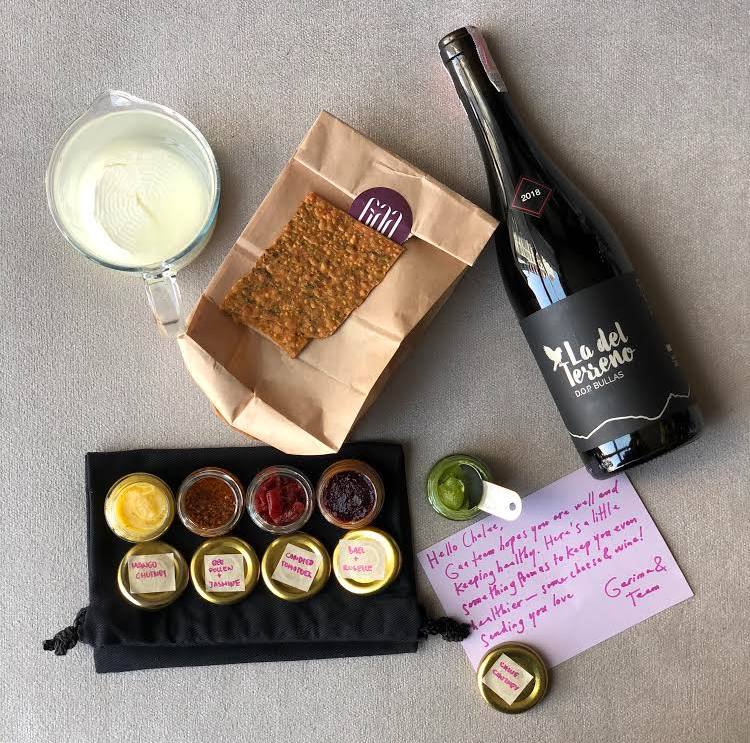 Some of the city’s most promising new restaurants were left floundering. But Zenaida Vannaying, owner of Lola’s Kitchen, a Filipino restaurant that opened its doors to packed houses and rave reviews in January, vowed to fight on primarily for her staff, delivering steaming dishes of bulalo and kaldereta to customers. Vannaying said she is committed “100%” to maintaining service, unless staff safety is threatened.

Another familiar face on the Bangkok dining scene, award-winning celebrity chef Gaggan Anand, recently opened the eponymous fine-dining Gaggan Anand and the casual Indian-Mexican fusion restaurant Ms. Maria and Mr. Singh. Plans to keep the former location open by teaming up with Suhring (in which he is also a partner) were announced and then scuppered by the restrictions. But Anand, in self-isolation because of a sore throat (he later tested negative for the virus) said he planned to stay in business by selling wraps and curries from the fusion restaurant’s menu — a far cry from the playful spectacle and dizzying price tags that are his trademark.

“We all have to look at surviving,” he said. “But it’s going to be a very tough time in the next six months.”

Others have launched new products that reflect their sense of community. Community-Supported Agriculture boxes from Bo.lan Grocer are packed with a potluck of organic produce similar to the ingredients used in Bo.lan, a restaurant known as much for its exacting approach to sustainability as its heady Thai flavors. “[The boxes] raise awareness of ethical, sustainable produce and food security,” said Dharath Hoonchamlong, Bo.lan’s environmental manager. “It supports local producers, especially in this time when it’s harder for them to access markets,” he added. “We need to help them sustain their livelihood.” The boxes are delivered with easy-to-follow recipes for the most seasonal ingredients.

When the in-house dining ban was announced, Garima Arora of Gaa, named best female chef in Asia in 2019, thought first of her fellow chefs around town. “It’s not a good feeling to be packing away your restaurant not knowing when you will be back again,” Arora said. So she decided to send out gifts of cheese and wine, each accompanied with an uplifting handwritten note. “I guess I thought all my friends must feel the same. So we made a little care package to let them know we’re all in this together.”

Social media has been an obvious platform for bringing the industry together. The popular website Bangkok Foodies has created the hashtag #eatitforward, encouraging people to order from local businesses, post descriptions of their meals to social media to promote the businesses involved, and push their friends to do the same. 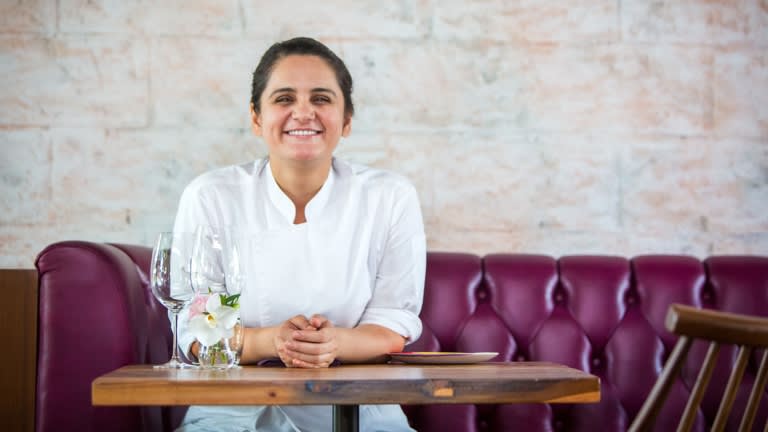 Top: Garima Arora of Gaa finds herself in the same predicament as many other chefs. Bottom: A Gaa creation with guava leather, hung yogurt and pomegranate. (Courtesy of Gaa)

“It’s kicking off for sure,” she said, with #eatitforward gaining traction even abroad. “There have been only positive reactions so far.” Chef Deepanker Khosla, who has pioneered urban farming at Haoma, sees an immediate need to provide help for tens of thousands of immigrant workers, primarily from Myanmar, who worked in kitchens as stewards, cleaners and back waiters but have lost their jobs and do not qualify for government assistance.

“No one goes hungry,” said Khosla, who has appealed for donations from individuals and other restaurateurs. “Do I have the money to do this? No. Do I have the will? Yes,” Khosla said, adding that donations to his crowdfunding page totaled nearly $3,000 on the first day.

He calculates that a healthy meal wrapped in a sustainable banana leaf can be produced for less than 50 cents, including immunity-boosting ingredients such as turmeric and ginger. In its first night on the streets his team distributed 2,000 meals; it aims to reach 10,000. 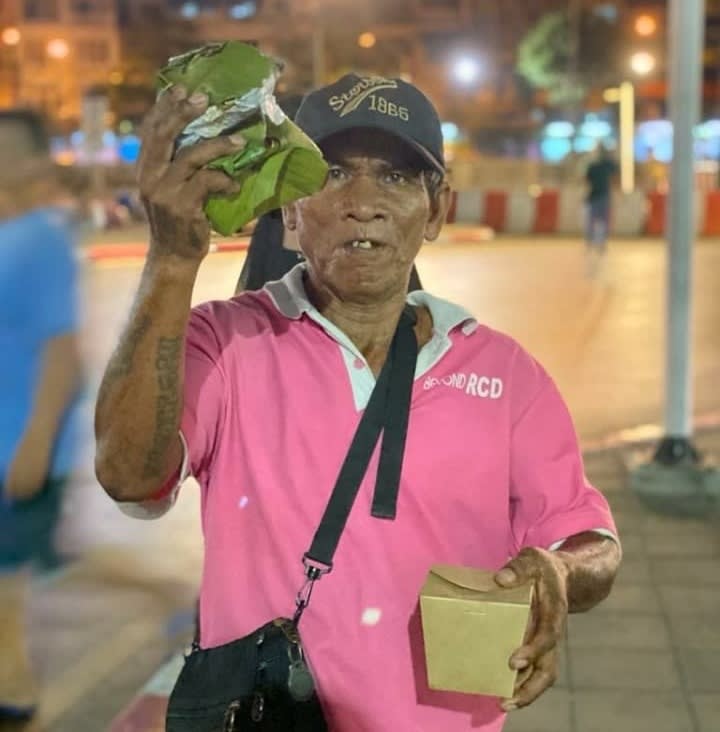 Bangkok’s restaurateurs are not alone in their efforts to help their local community. In Malaysia, for example, Fruiti King, headquartered in the Klang Valley, is delivering free popsicles to locals, hospitals and police stations. Founder Max Teh said the idea was “to share some joy with the folks in this very depressing and distressing virus outbreak period” in the form of the company’s bestselling Musang King durian ice creams and other fruit-based flavors.

In Hong Kong, Black Sheep Restaurants, a group of 25 venues that includes some of the city’s best-known eateries, is doing what it can to safeguard the most vulnerable members of its 1,000-plus staff. Chef Daniel Calvert, of the flagship restaurant Belon, ranked fourth on the 2020 list of Asia’s 50 Best Restaurants (announced on March 24 in the midst of the crisis) is focusing not on celebration but on solidarity.

“We’re fighting for our own community,” he said. “And for Hong Kong. It’s getting tough.” A year before the virus hit, the group started an in-house Family Fund that will now be diverted to provide necessities for staffers in difficult situations. Proceeds from sales of Belon’s signature Three Yellow Roast Chicken dish and a special menu dubbed A Feast for Our Family also will go to personnel in need.

In Singapore, L.G. Han, the chef at the Michelin-starred Labyrinth, is delivering free meals to health care workers at the National Centre for Infectious Diseases and other public hospitals, in collaboration with several other local businesses. “It started when many Singaporean medical workers were rejected from coffee shops and restaurants because of fears of being exposed to the virus,” he said.

Han decided to set aside corkage fees and a cut of every dinner and bottle of wine he sold. Pezzo Group offered pizza, bento boxes and chicken rice sets, while Diya Tan of Sanity Coffee pledged coffee. Keng Eng Kee (KEK), Jam at Siri House and other businesses have also made donations in cash and kind. 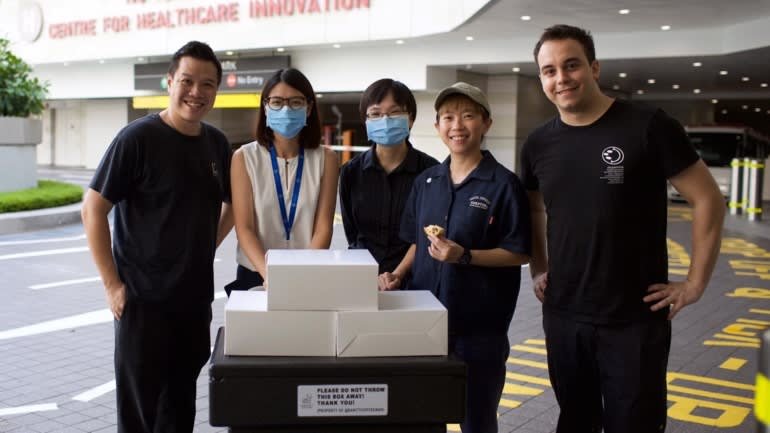 Han said he recognizes that helping others is not always easy. All food and beverage businesses are struggling as the pandemic worsens, with rising numbers of cases in many Asian countries.

But “giving is giving, even if the business takes a hit,” he said, summing up his philosophy: “We can help. We have food, we can give, and we have heart.”