SHANGHAI — China’s economy in the first quarter contracted for the first time since 1992, dealt a painful blow by the coronavirus pandemic, as the government’s fiscal measures failed to immediately alleviate hardship.

The 6.8% contraction announced by the National Bureau of Statistics on Friday marked a sharp decline from the 6% growth logged in the last quarter of 2019. It is lower than the median negative 3.7% forecast by economists polled by Nikkei.

The government warned that the ongoing pandemic posed challenges for production resumption and economic growth.

“We must … accelerate the full restoration of production and orderly life under the normalization of epidemic prevention and control,” the bureau said in a statement.

Beijing imposed a strict lockdown that crippled economic activities from Jan. 23 to contain the deadly virus that emerged in the central city of Wuhan in late 2019.

The stock market was little changed as the historically weak GDP figure was largely factored in. The Shanghai Composite Index fell 0.2% at one point during morning trading before recovering to 2,845.03 points on Friday noon.

As economic activity ground to a halt, exports shrank 13.3% in the first quarter from a 2% growth in the last quarter of 2019. Imports also declined 2.9% from 3.4% over the same period, hurt by trading disruptions with major partners in the U.S. and Europe. 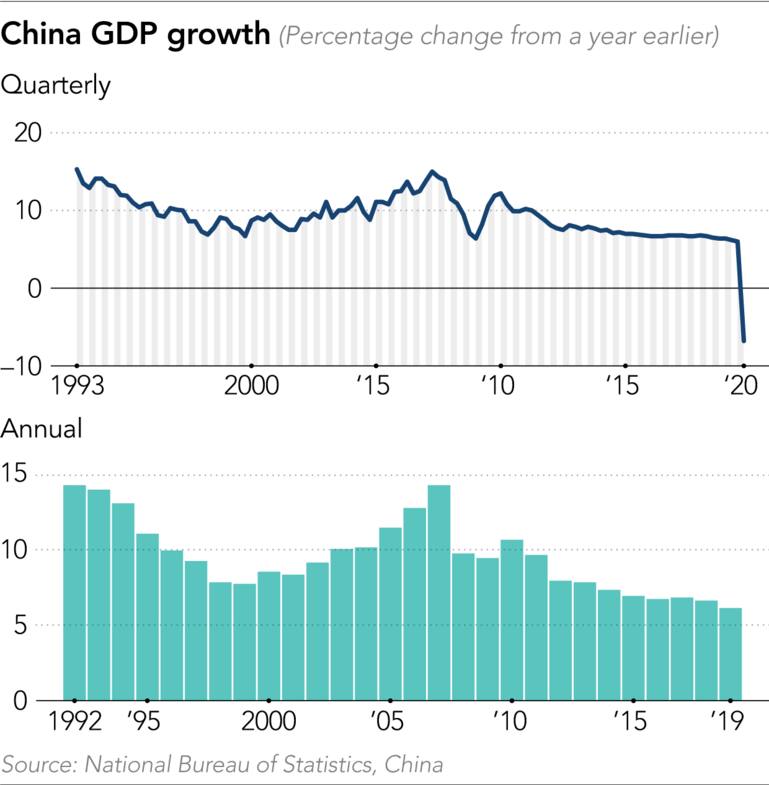 Analysts expect trade growth to deteriorate further in the second quarter after the coronavirus spread to most of the world even as China’s factories start to crank up output.

Even so, growth weakened across economic sectors. Fixed asset investment declined 16.1%, driven by falls of 25% in manufacturing and 19.7% in infrastructure, respectively. The reduction was offset by investment in e-commerce and high-technology services that grew 39.6%.

While spending on food and medicines grew, total retail sales of consumer products fell by 19%.

In a study of consumer sentiment in the second week of April, Morgan Stanley concluded that recovery remained at a “slow pace” with about a quarter of those surveyed saying they would go out for discretionary shopping and socializing in the coming weeks.

“It will be over a while before people get to normality because [they] get a little nervous,” Andrew Miles, deputy CEO at Walmart China, told the Nikkei Asian Review in an interview.

“The GDP contraction in January-March will translate into permanent income losses, reflected in bankruptcies across small companies and job losses,” said Yue Su of the Economist Intelligence Unit.

The weeks-long lockdown and travel ban have been harsh for small and medium enterprises like Left Pocket Creatives, an animation production company with about 100 staff in the Songjiang District of Shanghai.

Yu Xin, the company founder, said government assistance that includes loans had helped her company to stay afloat for now.

“We now focus on short educational video clips, instead of long series, targeting home-bound children who have yet to return to school,” Yu said.

While China has so far not announced the official GDP projection for the year, the International Monetary Fund projected last week a growth rate of 1.2%.

Citing growing external uncertainties, the government may not offer specific numbers or ranges for the growth target in its Government Work Report expected to be released at a legislative meeting in June, Chen Wenling, chief economist of a government think tank, wrote in state media Global Times on Wednesday. “[The government] will keep the economy growing within a reasonable range.”

While the supply-chain has been up and running as work resumption crossed 90% for many businesses, demand is being restrained by unemployment and a drop in nationwide per capita disposable income, which declined 3.9% in the first quarter.

“The double-digit decline in industrial sales for exports last month adds to signs that external headwinds are intensifying,” said Julian Evans-Pritchard of Capital Economics. “China is in for a drawn-out recovery.”

The pace of that may depend on how well the coronavirus is contained both in China and overseas, which has dampened demand for Chinese goods.

While a majority of U.S. companies in China have ruled out relocating production or sourcing from abroad, some might consider diversification, a U.S. trade organization in China said on Friday.

“We expect to see companies adopting a ‘China plus 1’ strategy as a way to diversify supply chain risks,” said Alan Beebe, president of AmCham China.