HONG KONG/SHANGHAI — Chinese customers of troubled Luckin Coffee raced to use their remaining vouchers for coffee on Friday after an ongoing internal probe found the company to have fabricated sales of 2.2 billion yuan ($310 million) last year.

Orders flooded into its system causing its server to crash during the peak noon hour, the homegrown mainland Chinese chain said on its social media page.

The surge of coffee orders reflects the depth of trouble Luckin is facing, as customers seize a chance to redeem their unused discount vouchers over fears that the proud rival of Starbucks in China will collapse because of the scandal.

“I am shocked that Luckin’s situation has deteriorated so fast,” said Kelly Chai, a white-collar worker at a technology company in Beijing. “Before yesterday, I thought it was steadily moving toward profitability,” she said.

When Chai and her colleagues tried to use their discount vouchers on Friday before they became invalid, they found the door to the nearest Luckin shop shuttered. “I bought coffee there yesterday,” Chai said.

Founded in 2017, Luckin has been seen as a fierce competitor to Starbucks in China. In just three years, it has opened more than 4,500 stores, surpassing Starbucks and becoming the largest coffee chain in China. A Luckin shop in Beijing. The falsified sales unearthed by an internal probe are equivalent to more than 40% of Luckin’s stated 2019 revenue, based on the company’s reports and guidance.

Shares at the Nasdaq-listed company plunged 76% on Thursday to $6.40 on the news of the falsified data, and its market cap shrank to $1.6 billion from $6.6 billion.

For stores that remain open, people are lining up for coffee. It is a rare experience for Luckin’s customers, as they usually place orders through its mobile application and have the drinks delivered.

“We have unusually more orders today,” said an employee at Luckin’s Gubei outlet in Shanghai. Located inside a supermarket surrounded by housing estates, the store is usually quiet after lunchtime, but it was crowded even at 3 p.m. on Friday.

One customer, a college student, said he gave up ordering a latte coffee after waiting for 10 minutes to make a purchase through the Luckin app. “The system jammed,” he said, and walked out looking disappointed.

Outside a Luckin store at an office building in Beijing’s financial district, Guomao, about 10 people were lining up around noon, according to Wang Dan, an economist at a research institute in Beijing. By contrast, there were only three people at the Starbucks store nearby. Despite Luckin’s less-expensive offerings, Wang insisted on buying coffee from Starbucks.

“Luckin’s business relies on subsidies [to customers]. It lacks the culture and provides very bad employee benefits,” she said. 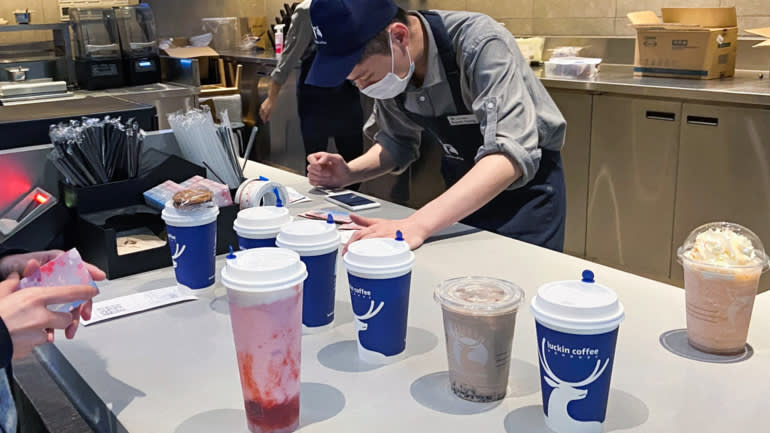 A Luckin store in Guangzhou. China’s securities regulator condemned the company for falsifying sales data and vowed to probe the incident and protect investors’ interests. (Photo by Yusuke Hinata)

The fabricated sales unearthed by the internal probe are equivalent to more than 40% of its stated 2019 revenue, based on the company’s reports and guidance.

The company said in a release on Thursday that investors “should no longer rely upon” its previous financial statements covering the last three quarters of 2019. Its chief operating officer, Liu Jian, and several employees who report to him, were suspended over the scandal, the company said.

The scandal also drew fire from China’s securities regulator. In a statement published on the China Securities Regulatory Commission’s website, it condemned Luckin for falsifying sales data and vowed to probe the incident and protect investors’ interests.

The company’s troubles also spilled over to its investors.

Charles Lu, an angel investor and a member of the company’s board, saw the share price of the car-rental company he founded, Car Inc., slump as much as 72% in Hong Kong on Friday. The company’s trading was later suspended.

While Chai, the Beijing tech company worker, was shocked by the news of the scandal, she said the absence of Luckin Coffee will have very limited impact on her daily life.

“I don’t rely on its products,” she said, adding that she is more of a drinker of Chinese tea. “I only buy when there is a coupon.”