JAKARTA — Every Friday, Adrian Putra would go early to worship at the crowded Istiqlal Mosque in central Jakarta to get himself a place inside and avoid praying in the baking noontime heat.

But he hasn’t been for two weeks because the expansive white domed sanctuary, Southeast Asia’s largest mosque, has canceled Friday prayers that are mandatory for Muslim men. This is to prevent close contact between people as the new coronavirus rips through the world’s fourth-most populous nation.

Still, the 33-year old says it’s for the best: “People shouldn’t be stupid by insisting on praying and getting the disease afterward… [Religious leaders] have assured us it is OK [to miss Friday prayers], and this is all happening under God’s will.”

Regulars worshippers at Istiqlal are among millions of people in Southeast Asia, including Christians, Buddhists, Hindus and those of other faiths who have seen the outbreak wreak havoc on their spiritual lives.

As of Sunday, the 10 members of the Association of Southeast Asian Nations had recorded 7,150 cases and 208 deaths, according to the World Health Organization. Many countries in the sprawling region with a population of some 650 million people lack adequate health infrastructure, including hospital beds, making social distancing a priority over attending prayers and services.

While devout religious beliefs often clash with scientific advice, they are unable to ignore the severity of the outbreak, with many now resigned to religious gatherings being curbed. 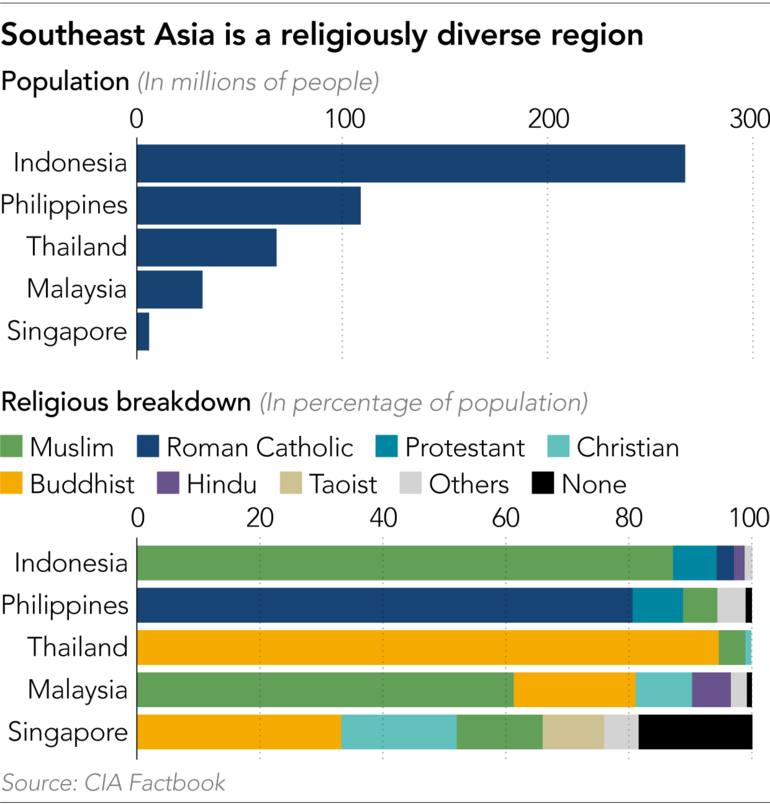 In normal times, the Istiqlal Mosque blasts out a call to prayer just before noon on Friday, the Islamic holy day, drawing worshippers to its massive, rectangular prayer hall.

But after President Joko Widodo called on Indonesians to “work from home, study from home and pray from home,” it has been empty the past two Fridays. On March 20, the only worshippers were construction workers renovating the mosque.

While there is no nationwide lockdown in Indonesia, the country’s top Islamic body, has issued a fatwa — nonbinding legal opinions on points of Islamic law — saying that if a Muslim person was in an area with high potential for COVID-19 transmission, mandatory Friday prayers at mosques could be replaced by praying at home.

The need for social distancing among the pious became an urgent priority after a gathering of 16,000 Muslims at a sprawling mosque complex on the outskirts of Kuala Lumpur, Malaysia, late last month. Much like in South Korea, where a major outbreak stemmed from a gathering of a Christian-based religious sect, hundreds of people became infected, leading to a spike in cases in Malaysia. It is now Southeast Asia’s most infected nation. People pray at a mosque during Friday prayers in Jakarta. (Photo by Dimas Ardian)

Malaysia, where the official religion is Islam, has been under lockdown since March 18, restricting movements of citizens in the country and closing its borders. It has also banned Muslims from going to mosques to pray.

Organizers of the gathering that triggered the mass outbreak in Malaysia, which also saw infections among participants from other countries including Cambodia and Vietnam, had planned a similar event in Indonesia’s South Sulawesi province. But they called it off under pressure from authorities. 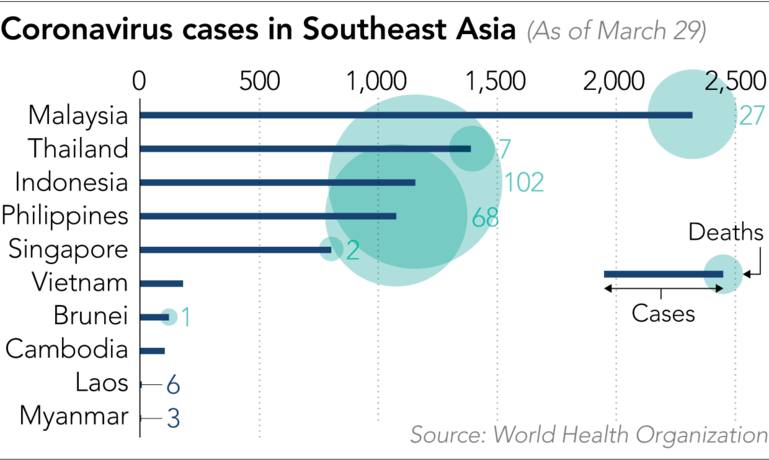 Berry Juliandi, a professor of biology at Bogor Agricultural University in Indonesia, said that religions can be quite flexible during difficult times, often by drawing on their own deep well of tradition, scholarship and experience.

“Some groups of believers tend to believe religion as it is, without questioning what the purpose is or under what, circumstances it can be bent, but so many references in religion are actually tolerant toward special circumstances,” said Juliandi, a member of the Young Scientist Forum, which has issued recommendations to the government on tackling the outbreak.

“For example, in Islam, cleansing the body with water before praying could be substituted with dust if there is no water available,” he said.

Nasaruddin Umar, chairman of the Istiqlal Mosque in Jakarta, agrees.

“Friday Prayers are indeed mandatory, but the Prophet has also given leeway if there is a disaster and an outbreak, [when prayer] cannot be done,” he said, referring to Muhammad, Islam’s founder. “We are forbidden to plunge into destruction. Men who do not pray on Friday can multiply other worship and pray. God is all-knowing and all-knowing of our condition.” 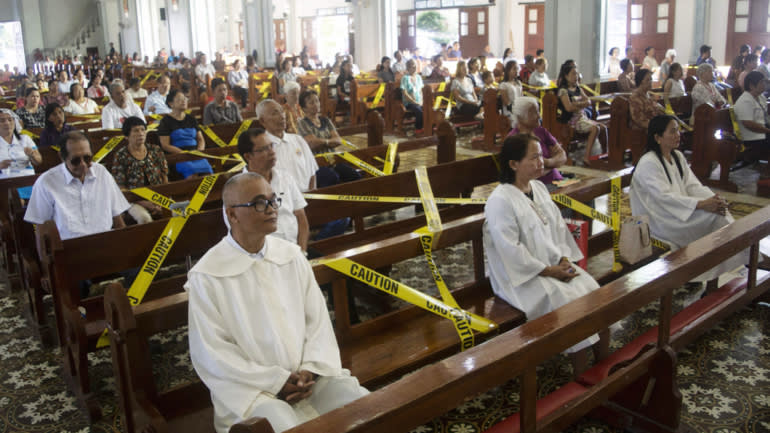 In the Philippines, where 80% of the population are Catholic, President Rodrigo Duterte placed the whole of Luzon island, home to Manila and 57 million people, on lockdown in mid-March. The order forced churches to cancel masses, and many archdioceses decided to broadcast services on Facebook.

The “enhanced community quarantine” bans people from leaving their homes, except for buying food or medicine, and will last until Easter Sunday on April 12.

Charles Caluza, a 22-year-old training officer at a logistics company, had never missed a Sunday mass since he became an altar boy at the age of eight. This changed on March 15 when Metro Manila was locked down.

“It felt strange,” Caluza said. “My grandmother said this has never happened before,” he added.

“Personally, [coronavirus] strengthens my faith. Some people who were not used to attending Sunday masses are tuning in to the livestreaming now,” he said. “With food supplies depleting because of the lockdown, we’re just holding on to our faith.”

But Bishop Manny Carlos of Victory, a major evangelical church in Manila, said the worship experience “is not the same” with online services.

“But,” he added, “In this crisis, people are more attentive. I think they are hanging on to every word of encouragement.” A Buddhist monk wearing a face mask crosses a street in Bangkok on March 25. (Photo by Akira Kodaka)

Pratin Pringraska, a 60-year-old Thai Buddhist, used to think the risk of getting the virus was trivial compared to shows of devoutness. “If I have to die, I can die from anything, not only this virus,” she said.

But the rising number of cases has since changed the attitude of Pringraksa and many other Thais.

“Now I am more alert. I try to avoid going to crowded places,” Pringraksa said. “I am praying more at home, making a wish to everyone in the world to be safe.”

In Singapore, one COVID-19 cluster has been linked to the Grace Assembly of God Church, with another tied to the Life Church and Missions Singapore. Places of worship in the city-state may remain open only for private prayers and essential rites, provided that groups of more than 10 people do not gather. Crowds fill the Istiqlal mosque in Jakarta on March 13 for the last Friday prayers before a temporary ban on public worship was imposed in Indonesia.

Before the outbreak spread outside China, one famous Muslim cleric in Indonesia called the virus “an army” sent by Allah to the Chinese to protect Uighur Muslims, who human rights groups and foreign governments say have been forced along with members of other Muslim minority groups in China into massive detention camps. China denies any persecution.

But comments by figures such as the cleric are being discerned by some as nothing more than seeking to take advantage of the spread of the virus to advance their own politicized religious views.

Eny Wulandari, a 36-year-old office worker in Jakarta, flatly says it is “misleading” to call the coronavirus Allah’s army.

“It is sad because people would think Islam isn’t sensitive to the medical field,” Wulandari said. “It’s not right to relate this pandemic with religion when you should see it from the medical or scientific point of view.”