The outlooks for Asian economies have greatly deteriorated due to the impact from the corona shock. With the ongoing spread of the novel coronavirus, Asian economists have drastically lowered their growth projections. Some forecasts see negative growth rates for 2020 in Singapore and Thailand. Indonesia, the Philippines and India face the end of rapid growth of about 5% or more in the past several years. Further downward revisions are expected if the virus is not contained.

An increase in unemployment is projected throughout the region. Economists now express concern about potential social impact from the shock, a survey shows.

The Japan Center for Economic Research and Nikkei conducted a quarterly consensus survey from March 6 to March 26, collecting 33 answers from economists and analysts in the five biggest ASEAN members — Indonesia, Malaysia, the Philippines, Singapore, and Thailand — as well as in India.

The 2020 growth projections for the five ASEAN economies were revised down significantly from the previous survey in December. Coronavirus infections have spread worldwide since January, and have been hitting the global and Asian economies. Some economists held off answering growth forecasts this time as they had not finished their revisions.

The economies of export-oriented Singapore and Thailand were projected to be especially damaged. Economists predicted the growth from minus 0.4% to 0% for Singapore in 2020. Half of the economists foresaw negative growth rates for Thailand in 2020. Manu Bhaskaran of Centennial Asia in Singapore, who predicted minus 0.4% growth, said “the virus crisis will worsen in the U.S. and Europe, depressing global demand which will hurt Singapore through 2Q20.” Somprawin Manprasert of Bank of Ayudhya forecast minus 0.8% growth for Thailand in 2020. “The outbreak would not only hit tourism and related sectors,” he said, “but also the Thai economy via supply disruptions in many countries and negative income effects.”

The Indonesian and Philippine economies have achieved robust growth of around 5% or more for years but are likely to decelerate sharply. Dendi Ramdani of Bank Mandiri in Indonesia explained that the “economic activities — e.g. tourism, hotel, restaurant, and retail sectors — decline significantly [and] commodity prices drop. Those are affecting the income of many people.” The Philippines introduced a lockdown of metro Manila on March 15. “The efforts to contain the pathogen may erode aggregate demand in the near-term,” observed Carlo Asuncion of Union Bank of the Philippines. 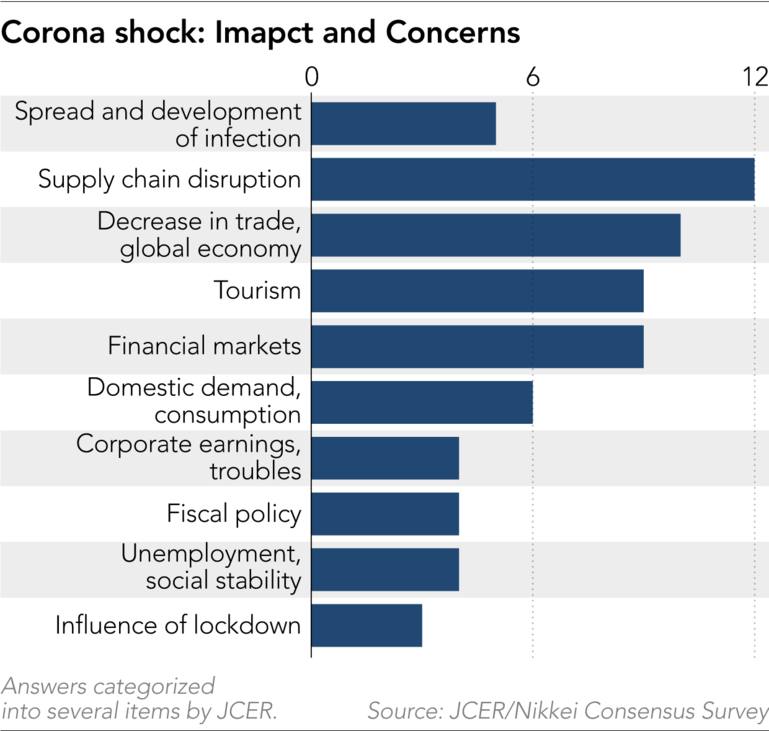 Following the summer of 2019, the Indian economy had already slowed from the 7% level to the 5% level on various factors, including troubled financial sectors. The corona shock added another burden. The country introduced a nationwide lockdown on March 25. The average growth projection for 2020-2021 was lowered by 1 point to 5.1% from the previous survey. “We expect the Indian economy to remain on a low-growth trajectory for the next three years,” said Tirthankar Patnaik of National Stock Exchange of India.

Most projections follow the assumption that the spread of infection will be controlled worldwide in the first half of this year. If it is prolonged, the damage to economies could be greater. “If it does not improve and the situation worsens, then a recession is imminent [and] we might have to revise our forecast,” remarked Wan Suhaimie of Kenanga Investment Bank in Malaysia. “If the outbreak of Covid-19 is prolonged throughout the year … the recovery [would be] in a U- or even L-shape,” said Amonthep Chawla of CIMB Thai Bank.

The survey asked economists about concrete impacts of the corona shock as well as their own concerns. They focused on the projected timeline for containment of the virus, as well as its influence on supply chains, global trade and financial markets. Dharmakirti Joshi of Crisil in India expected “a deep hit” from the shock “to global growth and supply chains.” He also said that “the hit to global growth will affect India’s export earnings.” He further noted that “factory shutdowns across global supply chains would also disrupt domestic production dependent on intermediate imports.” Pauline Revillas of Metrobank in the Philippines focused on “deteriorating sentiment in the financial markets.” Economists also paid attention to policies. “The challenge of Covid-19 requires significant stimulus [from the] government,” remarked Alvin Ang of Ateneo de Manila University. Unemployment rates are expected to rise in all countries, including India, where no official regular statistics are available. Higher unemployment, along with the distress of small and medium enterprises, would “create social problems,” warned Umar Juoro of the Habibie Center in Indonesia. Randolph Tan of Singapore University of Social Sciences predicted that the influence of the corona shock “will [cause] a continuous ripple in Singapore that goes beyond economic disruption, and could pose a rising new threat to the social fabric.”

Asked the risks for their economies in the coming 12 months, most economists answered “corona shock” as the biggest risk. “U.S.-China tensions” had been the top risk for about three years, but economists’ judgments have completely changed.