Global cases have reached 2,319,066, according to the World Health Organization.

9:32 a.m Yoshio Tateishi, a member of the founding family of Japanese electronics maker Omron, has died after being diagnosed with COVID-19 at a hospital in Kyoto. The 80-year-old was a former president of the company and had also served as head of the Kyoto Chamber of Commerce and Industry.

8:46 a.m. Virgin Australia Holdings says it entered voluntary administration to recapitalize due to the coronavirus crisis and high debt load. The airline said it could not secure a 1.4 billion Australian dollar ($887.6 million) government loan. Deloitte has been appointed as the administrator.

7:45 a.m. U.S. President Donald Trump said on Monday that New York Governor Andrew Cuomo will visit the White House on Tuesday to discuss coronavirus response. New York has been an epicenter for the COVID-19 pandemic in the U.S.

2:55 a.m. South Korea and Taiwan have won praise and attention for fast and effective responses to the novel coronavirus that have so far allowed them to avoid the sort of damage seen elsewhere despite their proximity to the disease’s original epicenter.

12:45 a.m. The World Health Organization plans to ship 180 million surgical masks to countries in April and May, Reuters quotes WHO Director-General Tedros Adhanom Ghebreyesus as saying.

12:41 a.m. Vietnam has used travel bans aggressively to curb the spread of the coronavirus, yet it has made exceptions for employees of Samsung Electronics, a key source of local jobs.

11:00 p.m. Nintendo seeks to raise output of the Switch video game device this year in response to a jump in demand from homebound consumers, Nikkei has learned.

9:02 p.m. Fitch Ratings downgrades Hong Kong’s credit rating to “AA-” from “AA,” citing “a second major shock” to the economy in Covid-19, which has “compounded negative rating trends already in place from the reputational damage” brought on by social strife in 2019. Fitch last downgraded Hong Kong’s rating in September.

9:01 p.m. China slams as “discriminatory” India’s toughening of its foreign investment rules to prevent opportunistic takeovers of Indian companies by neighbors amid the economic fallout from the pandemic. The barriers set by New Delhi for “investors from specific countries … go against the general trend of liberalization and facilitation of trade and investment,” Ji Rong, the spokesperson of China’s embassy in India, says in a statement.

7:24 p.m. Bangkok Metropolitan Administration is extending a ban on alcohol sales until April 30. The ban started on April 10 and was scheduled to end on Monday.

7:08 p.m. The Taiwanese government has sent mobile phone messages to around 200,000 people who may have come into contact with 24 navy sailors who had tested positive for COVID-19. The sailors had disembarked from one of Taiwan’s largest navy ships over the past few days after having been on a goodwill mission to the Pacific island state of Palau. The sailors had returned to 10 Taiwanese cities, a government official said, but all 700 or so have now been recalled to be tested and quarantined.

Taiwan has 422 confirmed cases of coronavirus.

6:51 p.m. Macao is expected to record its first budget deficit since its handover to Chinese rule in 1999, after earmarking 50 billion pataca ($6.26 billion) in COVID-19 relief measures, Chief Executive Ho Iat-seng said in his first policy address on Monday.

6:20 p.m. Data from today — the first Monday after Japan’s state of emergency was extended beyond Tokyo and six other prefectures — shows that the Japanese government is far from achieving its goal of reducing commuter numbers by 70%.

6:09 p.m. Indonesia reports 185 new cases and eight additional deaths — the lowest daily counts for the past two weeks — bringing its totals to 6,760 cases and 590 deaths. Migrant workers are pictured in their dormitory at a construction site, during the coronavirus disease (COVID-19) outbreak in Singapore.

4:25 p.m. Singapore confirms a record 1,426 new cases, bringing its total to 8,014. The “vast majority” of the new infections are among migrant workers residing in dormitories, the health ministry says.

3:06 p.m. Japan’s ANA Holdings has revised down its earnings forecast for the year ended in March. The company now expects its net profit to have plunged by 76% from the same period a year ago, as the pandemic hit the airline hard in March. 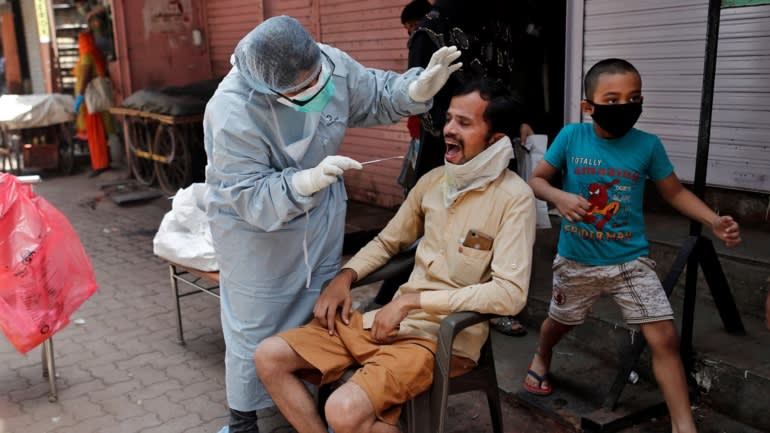 6:20 a.m. Health ministers of G-20 countries hold a teleconference where they agree to share information to counter the pandemic. Participants pointed out the weakness of medical systems and admitted that preparations were not adequate. Representatives from the World Bank and WHO, which has been questioned over its response by U.S. President Donald Trump, also attended.