TOKYO — Investors have been given a glimpse of plunging valuations at some of the world’s biggest startups after SoftBank Group admitted the Vision Fund — its $100bn wrapper of tech investments — had suffered a 1.8 trillion yen ($16.7 billion) investment loss in the year ended March.

SoftBank had reported a 798 billion yen loss for the fund in the nine months until December, indicating that it was hit by an additional one trillion yen loss in the January-March quarter as the new coronavirus outbreak wreaked havoc across financial markets.

Simple calculations show that the loss likely wiped out gains that the Vision Fund — also backed by Saudi Arabia and the United Arab Emirates, and intended to direct unprecedented financial firepower at fledgling tech companies — had accumulated since its launch some three years ago. Now the focus is turning to whether the Japanese tech group can stop the bleeding.

The Vision Fund’s unique structure requires it to return cash to investors even if returns turn negative. Half of the shares held by third party investors are preferred shares, which return a fixed 7% distribution every year — a structure originally designed to limit the risk of investing in such a large vehicle. The fund has set aside 15% of the fund’s total commitments to pay the fixed distributions as well as to make additional investments to its portfolio companies.

Softbank has not indicated where specific problems lie among the fund’s 88 investments — but here are the latest developments at key portfolio companies. 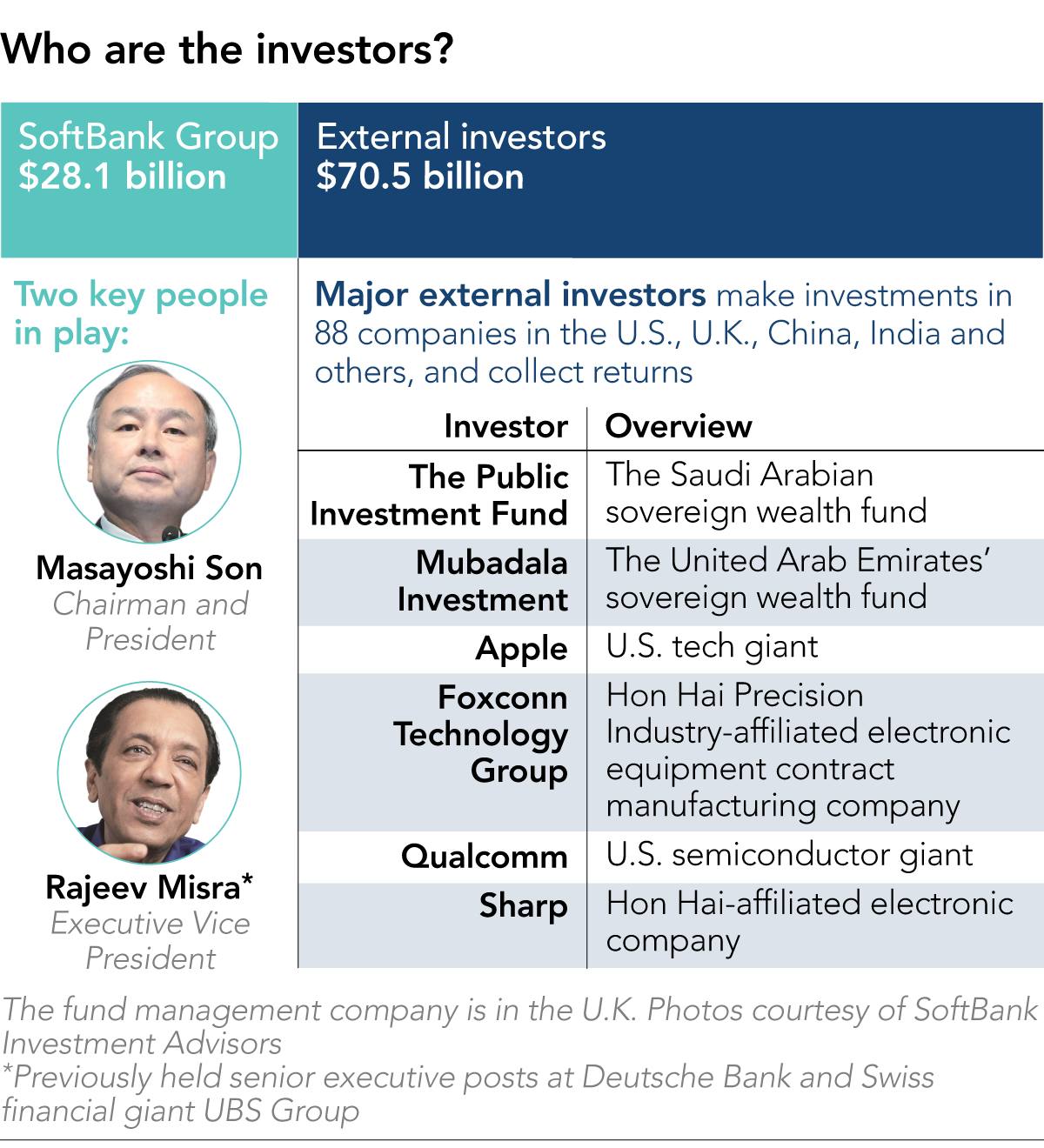 SoftBank has committed more than $14 billion for WeWork, the U.S. shared office provider, partly through the Vision Fund. SoftBank founder and CEO Masayoshi Son was lured by WeWork founder Adam Neumann’s ambitions to transform the real estate industry. In early 2019, WeWork said it raised funding at a $47 billion valuation.

The figure fell to $7.8 billion after WeWork canceled its IPO in late September. SoftBank has already booked losses from that sharp decline in valuation, and installed Marcelo Claure, one of Son’s top lieutenants, as executive chairman. In November, Son said turning around the company would be “easy” if it focuses on improving the occupancy rate of existing buildings.

But the coronavirus had added a new layer of uncertainty, as tenants shift to saving costs and working from home. In addition, two WeWork directors are leading a lawsuit against SoftBank and the Vision Fund, alleging that they violated a requirement to complete a $3 billion tender offer of WeWork shares. On Monday, SoftBank said it will book a nonoperating 800 billion yen loss partly from WeWork. The Vision Fund led a $1 billion investment round for Oyo Hotels & Homes in 2018. It participated in another funding round last year that reportedly valued the Indian hotel startup at $10 billion.

At a SoftBank event in Tokyo in July, Oyo’s founder Ritesh Agarwal, then 25, was introduced by Son as a “new superstar.” Agarwal went on to outline his ambitions to become the world’s largest hotel chain, by using artificial intelligence technology to empower small hotels.

But Oyo’s growth-at-all-costs strategy came under intense scrutiny after WeWork’s sharp drop in valuation. Conflicts with hotel owners over contracts began to intensify in some markets. Oyo laid off thousands of employees in search for profitability.

The coronavirus has fueled further concerns over its core business. In a video posted last week, Agarwal said revenue has declined 50-60% during the coronavirus pandemic. He said employees around the world will be put on temporary leave or furloughs of a minimum of 60 to 90 days. The unusually deep ties with SoftBank is also part of the concern — Son reportedly guaranteed loans to Agarwal to purchase shares from early investors. SoftBank Vision Fund: All you need to know in simple graphics

In 2018, Beijing-based ByteDance raised $3 billion in investment from SoftBank and others, according to industry portal Crunchbase. The Chinese social media giant is known for its hugely popular short video app TikTok and news aggregator Toutiao.

ByteDance logged revenue of 50 to 60 billion yuan (around $7 to $8.5 billion) in the first half of 2019, mostly through advertising in China, according to Reuters. The report, citing anonymous sources, said that ByteDance turned profitable in June 2019 and expected to continue making a profit in the second half of last year. ByteDance declined to comment.

Despite a global recession on the horizon, ByteDance — with a 50,000-strong workforce across over 30 countries — remains in an expansion mode, announcing that it will hire 6,000 more interns and full-time employees in the coming months. ByteDance has recently launched a search engine, integrated e-commerce into its streaming platform and produced video games. On the other hand, TikTok’s surging popularity in the U.S. has also fueled controversy in Washington, where some lawmakers have raised national security concerns. The Southeast Asian ride-hailing app Grab, valued at $14 billion, has raised about $3 billion from SoftBank and the Vision Fund. The Singapore-based company operates in eight countries in Southeast Asia and paints itself as a regional “super app” whose services range from ride-hailing to food delivery to finance.

The additional firepower may help the company weather the coronavirus outbreak. The pandemic has hit Grab’s core ride-hailing services hard, as more people refrain from traveling. In late March Grab said the company’s senior leaders would take a pay cut of up to 20% to help the affected drivers. Its food delivery business, on the other hand, has apparently gained momentum as more people stay at home.

Vir Biotechnology, a U.S. startup that develops drugs for infectious diseases, is one of Vision Fund’s eight listed assets and one of the best performing. The Vision Fund had invested about $200 million for around a fifth of its shares. Vir’s stock price has doubled since its lackluster IPO in October.

Last week, Vir said it agreed with Samsung Biologics to have the South Korean company manufacture potential coronavirus treatments. Samsung Biologics will shift to mass production at a facility in Incheon next year after the treatment is approved by health authorities in various countries.

Since the investments in health tech are relatively small, even significant gains in companies like Vir may not be enough to offset potential losses from its multibillion dollar bets in the sharing economy. Health tech only accounted for 6% of the value of Vision Fund’s portfolio as of December. 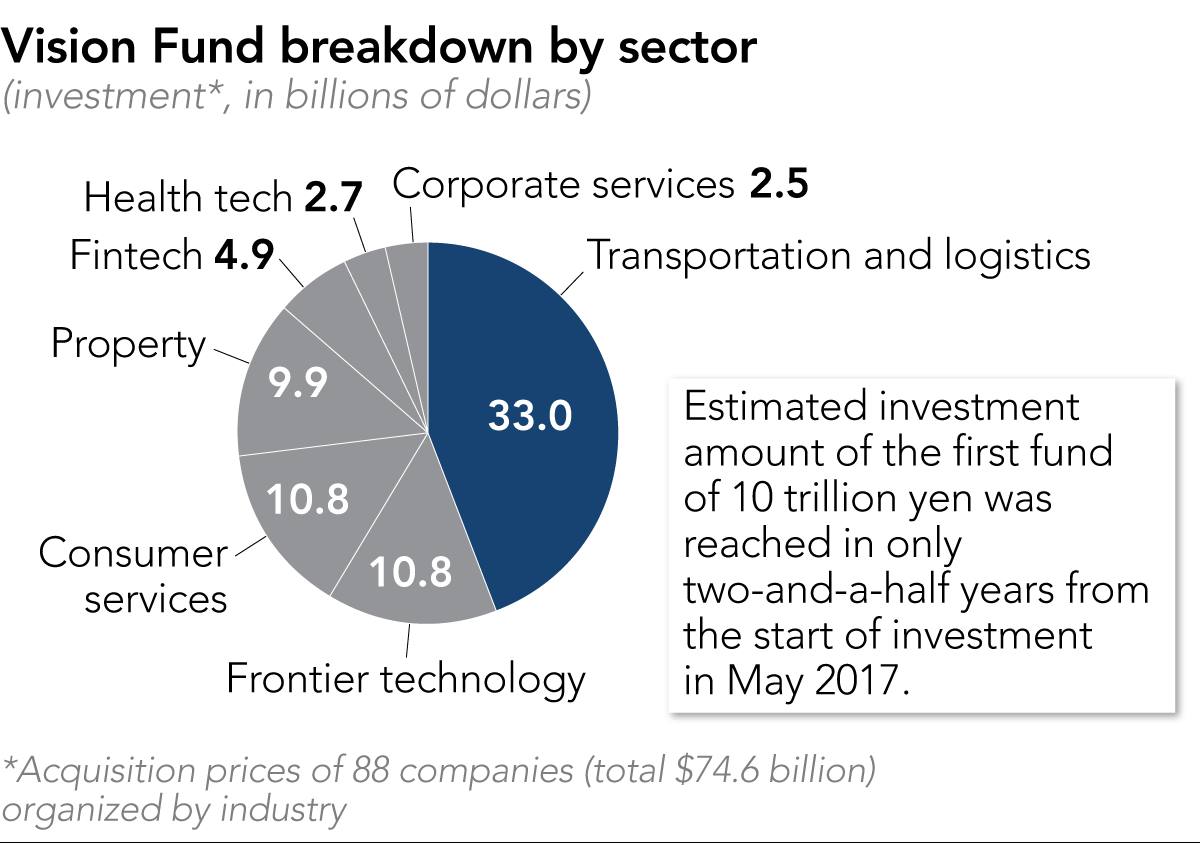 Softbank’s first investment in China’s ride-hailing market can be traced back to 2015. It put $600 million into Kuaidi Dache, one of the ride-sharing startups later consolidated into today’s Didi Chuxing. The Japanese company invested another $8 billion in Didi two years later and also purchased 5% of the company’s shares from e-commerce giant Alibaba Group, another Softbank investment.

The Information reported last month that Softbank is close to completing a new round of investment of $300 million in Didi’s newly founded autonomous driving unit.

Softbank’s confidence comes from Didi’s absolute market dominance in China. The startup quickly claimed a market share of more than 95% after it acquired rival Uber’s China operation in 2016. However, two fatal accidents involving Didi’s passengers in 2018 sparked public concern over safety and forced the company to suspend its most lucrative carpooling services, allowing rivals to win market share.

To make extra income for its more than 30 million drivers, the ride-hailing company rolled out delivery services in 21 Chinese cities in March and plans to launch leasing services with state-owned automakers BAIC Group. Indonesian e-commerce giant Tokopedia has received multiple funding from SoftBank, but none more crucial than the $100 million round led by the Japanese company in 2014. It pulled Tokopedia back from the brink of bankruptcy. Since then, Tokopedia has become Indonesia’s biggest online marketplace and in November 2018, it raised $1.1 billion from the Vision Fund as well as from China’s Alibaba.

Tokopedia has tasted success on the back of Indonesia growing to become the largest internet economy in Southeast Asia, and seems to be enjoying a windfall from the coronavirus outbreak in the archipelago, as more and more people stay indoors, and rely on online shopping. Transaction volume in March in the health care category increased almost three times, the company said, with the number of new sellers in this category increasing by almost 2.5 times compared to previous monthly average.

Tokopedia said it has not had to lay off staff amid the coronavirus outbreak and will maintain its employee religious holiday allowance for the upcoming Ramadan.