SINGAPORE — Nicholas Yeo did not expect such a rocky start to his first year as a full-time freelance photographer. The 26-year-old graduate of Singapore’s Nanyang Technological University counted it a blessing that his passion for taking pictures was also his livelihood.

Now he doesn’t feel so lucky. As the new coronavirus swept the globe, he saw more and more work dry up as events were canceled or postponed for health and safety reasons.

In all, Yeo said he has had six projects killed off, costing him the equivalent of around $4,200. “I can hemorrhage for another three months before I call it quits,” he told the Nikkei Asian Review, adding, “I know people up the chain who’ve been though worse.”

Yeo is among scores of workers in the “gig economy,” particularly in the creative industries, who have seen their incomes pared during the pandemic. These workers, who take up freelance jobs in lieu of permanent company positions, are some of the most exposed people in the labor force as economies go into hibernation.

“These workers are often the first ones to be cut during a downturn, and are viewed as more discretionary spending by many companies,” Carlos Castelan, managing director of the Navio Group business consultancy, told the Nikkei Asian Review.

At the same time, most have no safety net to fall back on.

“Unprotected workers, including self-employed, casual and gig workers, are the most critical groups as they do not have access to paid or sick leave mechanisms, and are less protected by conventional social protection mechanisms,” said Patuan Samosir, senior director at the International Trade Union Confederation – Asia Pacific.

With restrictions and lockdowns disrupting business activity across the region, participants in what had been a burgeoning gig economy are tallying up the costs, turning to each other for moral support, and looking to their governments for assistance. A food delivery cyclist in Sydney: Despite expectations for a surge in online food orders, most gig workers are in a precarious economic position.

“I Lost My Gig,” a movement among freelancers that began in Australia and spread to Singapore, has set up an online forum for gig workers to record lost income due to the coronavirus. The combined losses reported by members from the two countries as of early April topped $215 million.

“There’s no opportunity for me to get any other work,” Rebecca Charles, a bartender, posted on the website. She said she has lost more than $1,200.

“Keep your heads high, my friends. We feel your pain. We are all in this together,” posted Mario Garza, a photographer who had work in Australia. He logged over $1,400 in lost income.

Other groups are stepping up as well. Singapore Unbound, which represents writers, created a relief fund to help members who are in dire straits as a result of canceled book events, plays and movie productions. The fund started out with $2,000 and offers grants of $200, using resources originally intended for writing fellowships.

“Singapore Unbound has decided to postpone this year’s writing fellowships to Southeast Asia, and to commit the funds instead to aid Singaporean writers badly affected by the shutdowns,” the group said on its website.

Labor statistics from Singapore showed that in 2018, close to one-tenth of all working residents in the city-state were self-employed. In Australia, a study of the gig economy by the state government of Victoria concluded that about one-twelfth of all employment in the country is gig work.

Not all gig workers are equal, however, and those who offer online services may fare better than freelancers with incomes tied to events, said Maria Figueroa, director of labor and policy research at Cornell University’s School of Industrial and Labor Relations.

“There’s likely to be a surge in demand for food delivery workers, too, as people are not patronizing restaurants as much,” Figueroa told the Nikkei Asian Review.

But Walter Theseira, an associate professor of economics at Singapore University of Social Sciences, believes even independent workers on food-delivery and ride-hailing platforms like Grab and Gojek are vulnerable.

“A lot of the platforms are able to sustain the wages that they do now because they’re sustained by cheap financing,” he said. “There is some concern about whether that financing is going to dry up.” 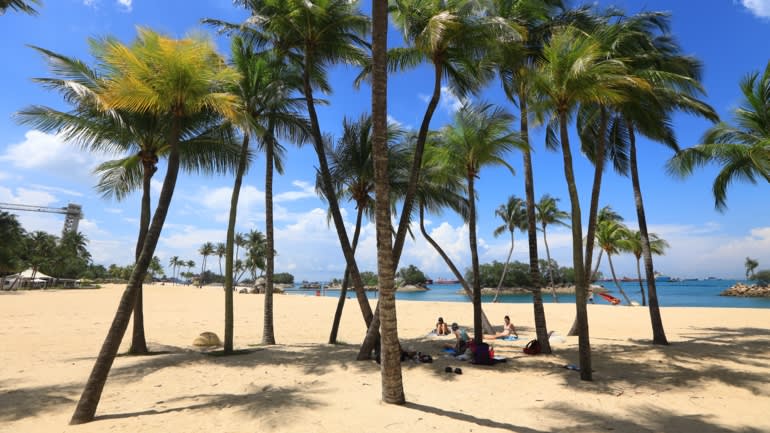 A nearly empty Siloso beach on the island of Sentosa, off Singapore, on April 4: As the economic goes into hibernation, self-employed workers stand to receive about $700 a month from the government for nine months.

While some companies may eliminate freelance jobs to cut costs, Emily Weisgrau, president of business consultancy Weiswood Strategies, warned this may be a double-edged sword, with those companies unable to lure back temporary workers when the situation returns to normal.

“Now is actually the time for businesses to retain freelancers, who can keep work moving without the additional financial burdens like health insurance and retirement benefits that employees expect,” Weisgrau said.

Governments across the region have rushed to deliver billions of dollars in aid to tide workers over during the coronavirus slowdown.

In Australia, the state of Victoria earmarked more than $300 million for displaced workers. In Singapore, self-employed workers stand to receive about $700 a month from the government for nine months.

Lower-to-middle-income residents in the city-state who face job or income losses can also apply to a temporary relief fund for help with living expenses. Those approved receive a one-time cash payment of about $350.

Freelancers like Yeo are hoping for an end to the pandemic and a return to normalcy. “Commercial gigs have been good, until the virus happened,” he said.

For now, he has applied for government assistance. “Never in my life would I have imagined I would want to queue to meet social services to beg for a handout,” Yeo said.