HONG KONG — A group of Hong Kong-based retail investors who own 2% of HSBC Holdings’ shares are demanding a scrip dividend in place of the cash distribution that was canceled by the bank for the first time in 74 years under pressure from U.K. regulators, and are threatening to mobilize to force a special shareholders’ meeting.

The group that has rallied on Facebook under the name HSBC Shareholders Alliance has more than 4,000 members and is hopeful of roping in investors who own a total of at least 5% of the company’s shares to meet the minimum threshold for an extraordinary general meeting. Retail investors in Hong Kong overall own a third of the shares of the London-headquartered bank, which receives half of its revenue and almost all of its profits from Asia.

A scrip dividend gives investors the option to receive the distribution in the form of equity, and the group hopes that will soften the financial hit on investors who rely on the stable dividend. The bank’s dividend yield averaged 5.97% over the past five years compared with 4.3% for the benchmark Hang Seng Index over the same period.

Following the dividend cut, which was announced last week, shareholders have voiced their anger, and a prominent political figure, C.Y. Leung, who served as the city’s chief executive from 2012 to 2017 called for the public to boycott the bank. “It is not a Hong Kong bank anymore,” he wrote in a Facebook post on Monday. “HSBC has no intention of relocating its headquarters back to Hong Kong… We should set up our own bank instead.”

A day after the dividend cut was announced, HSBC shares slumped 9.5% to an 11-year low. Its shares rose 2.8% in Hong Kong on Monday, marking its first gain in nine trading days. 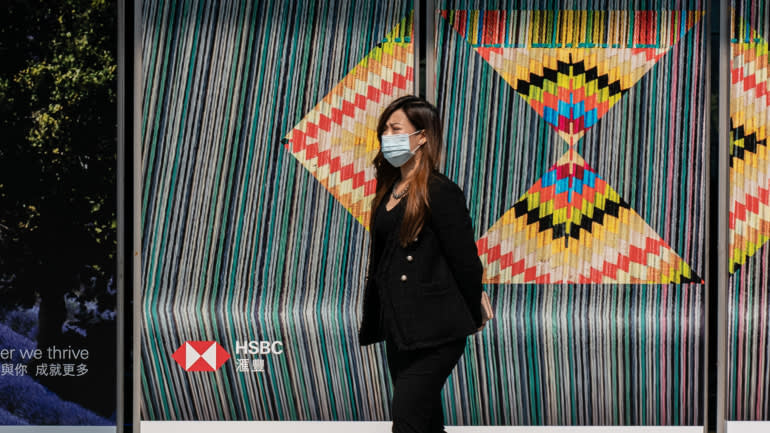 An HSBC spokeswoman said on Monday that the bank “deeply regrets” any harm caused by the decision and stressed that it had to comply with the request of the U.K. regulators.

“Under the arrangement [of the scrip dividend], HSBC can balance the interests of the U.K. regulator and its shareholders in Hong Kong,” Ken Lui, a representative of the alliance, said at a news conference on Monday.

Within days, the group has gathered more 300 shareholders, including retail investors, institutional investors and family offices, which account for about 2% of HSBC’s outstanding shares. The group, which has called for pay cuts for senior management and enhanced individual shareholder representation, has received enquiries from shareholders outside of Hong Kong as well, it said.

“If HSBC isn’t held accountable to its promise, and if there is no consequence for that, it would set a very bad precedence,” said Edward Yip of Surich Asset Management, which is advising the alliance. “Some very loyal investors in Hong Kong would lose their confidence completely,” he said. Surich itself does not own shares in HSBC.

HSBC was scheduled to pay a final interim dividend for 2019 of US$0.21 a share on April 14. But it was among five U.K.-based lenders that last month gave in to pressure from the country’s Prudential Regulation Authority to withhold its annual dividend and instead boost lending and build a capital buffer against any losses that could arise from the global coronavirus pandemic.

Barclays, Lloyds Bank, Royal Bank of Scotland and Standard Chartered have also acquiesced to the regulator’s demand to withhold their dividends. While British banks have bowed under pressure, the largest lenders in the U.S. will defend their plans to continue paying dividends, the Financial Times reported.

HSBC Chief Executive Noel Quinn apologized to Hong Kong shareholders in a letter last week following the cancellation of the dividend and said the bank’s board would review the stance once the economic impact of the pandemic was better understood.

An HSBC spokeswoman said on Monday that the bank “deeply regrets” any harm caused by the decision and stressed that it had to comply with the request of the regulators.

However, not all investors were in favor of taking stock in lieu of cash.

“A ‘scrip dividend’ in which everyone receives shares would be a pointless exercise, like dividing a pizza into smaller slices. You still own the same pizza,” David Webb, a prominent activist investor in Hong Kong, wrote on the alliance’s Facebook page on Monday. “It is like a ‘bonus issue.’ It would also create odd lots.”

Companies globally are holding back on dividends to conserve cash as large swathes of the global economy have been shut down in response to the pandemic.

Goldman Sachs last month said it expects S&P 500 dividends to fall by 25% in 2020 as leveraged companies suspend or cut dividends. IHS Markit estimates that dividend payouts will fall by 30% in the U.K. this year.