TOKYO — Tokyo, Osaka and other large cities in Japan were bereft of the usual crowds this weekend as governors asked people to stay home to curb the spread of the novel coronavirus.

The number of confirmed infections has jumped in recent days, with 343 new cases on Friday. That brought the number of people known to be infected with the virus in Japan to 3,039. Friday was the first time that there have been more than 300 new cases in a single day.

On Saturday, at least 118 more infections were confirmed in Tokyo, a metropolitan government official said, the first time the daily increase has topped 100. That followed 97 new infections on Thursday and 89 on Friday.

Tokyo Gov. Yuriko Koike asked residents to remain home on Saturday and Sunday, the second weekend in a row that the city has been largely shut down. Governors of other prefectures with large metropolitan areas, including Osaka and Fukuoka in western Japan, have also urged citizens to help curb the epidemic by not going out.

Tokyo’s popular Ginza shopping district had little pedestrian traffic on Saturday as big department stores, including Mitsukoshi and Matsuya, were shut. Isetan Mitsukoshi Holdings, which operates Mitsukoshi, announced the closure of its six stores in Greater Tokyo this weekend and on April 11 and 12.

The retailer suffered a 35% drop in sales in March from the previous year, hit by plummeting tourist spending and shorter operating hours. Sales may continue to slide in April due to the weekend shutdowns.

The normally packed Shibuya district, a magnet for fashion-conscious young people, was also eerily quiet. Shibuya 109, a landmark department store popular with teenagers, was closed from Saturday through April 12.

Shops selling essentials, such as top supermarket chain Aeon, were open however. Aeon’s 96 outlets in greater Tokyo were operating as usual. The 7-Eleven convenience store chain said it will keep its outlets open as well.

The closures announced by the governors are not mandatory. People can still be seen gathering public places, though in much smaller numbers than usual. 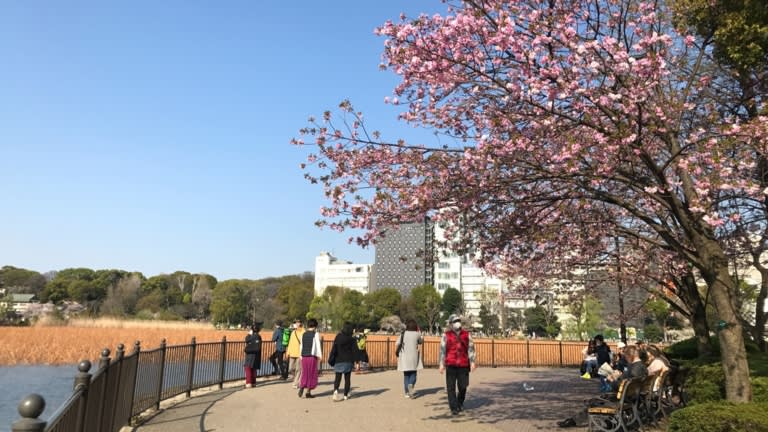 Tokyo’s Ueno Park, famed for its cherry blossoms at this time of year, is one. “I have two children and we needed fresh air, just for a short time. We can’t have a picnic, but we can still look at the cherry blossoms,” a 30-year-old woman told the Nikkei Asian Review.

Some defiant revelers, with masks pulled down, could be seen having snacks drinking beer under the trees, ignoring signs warning against gathering in groups.

One 72-year-old man from neighboring Saitama Prefecture visited the park after shopping in the Akihabara electronics district. He said he comes every year to see the flowers. “It’s usually packed with people during this season, but it’s very quiet this year,” he said.