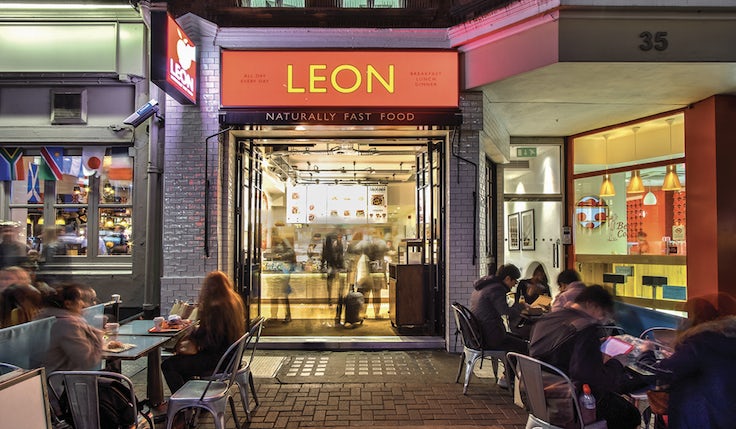 As the UK went into lockdown, food outlets closed their doors and pressure ramped up on the NHS, Leon knew it needed to pivot.

The restaurant chain, which has a long-standing relationship with the health service, had already been offering NHS staff a 50% discount on food and drink as the coronavirus crisis worsened.

At the time, the inbox of Leon chief executive John Vincent was inundated with messages from NHS workers asking for ways they could get hot, nutritious food for their teams as working hours extended and hospital canteens closed.

With its outlets in a state of temporary hibernation and kitchens lying empty, Vincent was approached by British actors Damian Lewis, Helen McCrory and Matt Lucas to team up on Feed NHS.

The principle is simple – members of the public can donate money to fund hot food for frontline NHS workers. The campaign raised £150,000 in its first four hours of operation and now four Leon restaurants are dedicated to serving the NHS.

Spearheading the initiative, Leon formed a coalition of restaurant chains – including Abokado, Franco Manca and Wasabi – to collaborate on the project.

“A lot of what this crisis is bringing out in all organisations is that you start discovering the means to be more adaptable than you ever realised you could be,” says Kirsty Saddler, Leon’s sustainability and values director, who was previously its brand and marketing director.

“Feed NHS has been the North Star in as much as it has kept us incredibly true to our mission and our values, and we feel proud of how far we’ve come with the fundraising. We are also proud of how we’ve been working to create a community of operators, caterers and logistics people, right back to food wholesalers, growers and producers, because that whole side of the business had begun to collapse as everybody shut their restaurants and eateries.”

With the Feed NHS movement in full-swing, Leon also adapted 14 of its restaurants into mini-supermarkets to cater for local residents living near selected outlets, including key workers in search of food at the end of a long shift.

Starting out selling basics such as milk, bread and eggs, the team accelerated the development of Leon’s own stews into pouch meals, an innovation the brand had started trialling with Sainsbury’s.

As Leon ramped up its support of the NHS, the team realised there was another side of the food service equation in need of help – food growers and producers. A concept was developed to connect the supply chain going into restaurants and food operators direct with consumers.

Launched this week, the Feeding Britain platform allows consumers to buy grocery boxes of fruit, veg, dairy options and meals for order online. Initially delivery will be to the user’s own home, although the plan is to enable shoppers to order for others. Any additional income, over and above what is needed to run the site, will be donated to the NHS.

We feel we are going to be future-fit after this crisis in a way that we wouldn’t have been as future-fit if we hadn’t have gone through this.

“This has been one of the strongest things we’ve seen – people not necessarily needing immediate support themselves, but being incredibly switched on to the support others need and ways they can give that,” says Saddler.

“Some of why we set up Feeding Britain was of course an opportunity for ourselves and for people in need, but also for those suppliers and growers who would otherwise have faced a very difficult time. It’s obviously early days, we’ve got lots to work out with this business model and the way we operate initially. We will do lots of gradual development.”

Opportunities in a crisis

Leon is clear that at times of crisis much can be achieved by joining forces with organisations across the supply chain. Saddler believes any well-founded brand will be thinking about how it can contribute to the community and its staff, and safeguard the long-term future of its business.

In fact, she believes that amid all the chaos there is real potential for progression.

“It’s a difficult word to use at a time like this, but it’s quite exciting to ask what this will mean for the future of our industry, or indeed any industry, when we come out the other side,” says Saddler.

“We’ve met a lot of people we didn’t know so well before and we’ve learnt about ways of collaborating that we maybe wouldn’t have come across. That’s a really constructive thing.”

As with everything – and particularly during a time of global crisis – it is important for brands to be clear about their own motivations. For Leon it is all about actions, rather than words.

“We’ve been led by our actions and that then links to being very transparent. We’ve sent a lot of letters to our club members being really open about what we are attempting to do and what we’ve learnt along the way,” Saddler explains.

“That transparency and openness is not of interest to everyone, but it is for quite a few people. We’ve had a tremendous volume of feedback thanking us for what we’re doing and that means a lot.”

On a personal level, she has learnt a “tremendous amount” so far from the experience of establishing Feed NHS and Feeding Britain. The process has taken her team outside their comfort zones, forcing them to run projects they never would have foreseen even three months ago.

A marketer for two decades, Saddler is now running all the logistics of Feed NHS backed by a support team, which requires a completely new skillset.

She believes the brands that are stepping up during this crisis are putting fear and ego aside, and learning new ways of thinking. “That has been one of the main reasons they have been able to accelerate and adapt,” Saddler adds.

“We feel that we are probably going to be future-fit after this [crisis] in a way that we wouldn’t have been as future-fit if we hadn’t have gone through this.”