“The game’s over. We are no match for the Chinese in LCDs,” said an official at a flat-panel parts maker in South Korea upon hearing the news of Samsung’s pullout in late March, voicing a widely held view among local suppliers and analysts.

To survive, both LG Display and Samsung are banking on more advanced technologies, such as organic light-emitting diode panels. But Chinese manufacturers are catching up. South Korean makers, which previously overtook their Japanese rivals with ambitious investments, are now at risk.

“This level of quality can’t be used in the iPhone.” That verdict from an Apple quality-control official last summer left OLED engineering staff at LG Display dumbstruck. The September release of the iPhone 11 was just around the corner.

LG Display had pinned its hopes on supplying OLED panels to Apple for the new iPhone. It had been making panels for the Apple Watch since it first came out, and wanted to furnish larger, high-definition panels for the iPhone as well. But Apple refused to compromise on quality. The root cause of LG Display’s miscalculation was overconfidence. The company initially planned to crank out large numbers of panels for the iPhone at a plant in Paju, South Korea. Much of the work is outsourced to group companies, such as forming the panel driver and sealing the light-emitting material. But improving quality and output fell behind schedule.

Pressed for time, LG Display began outsourcing to other companies, such as U.S.-based Applied Materials and Kateeva. LG Display was able to supply Apple with the needed components after a short delay, but the quality was uneven and deliveries did not grow as expected. That led to a slowdown at the Paju plant, causing the company to incur a one-time loss of 1.4 trillion won ($1.15 billion) in the 2019 October-December quarter.

“The [facility’s] future value does not match its book value,” Chief Financial Officer Seo Dong-hee said at the time. But shorn of accounting jargon the fact remained: LG Display’s technology did not meet Apple’s standards.

LG Display’s prospects for success in small and midsize OLED panels were never clear. The rapid growth of Chinese competitors forced it to invest in newer technology. Then, with Chinese rivals pouring so much money into LCDs — helped by generous government subsidies — there was such a market glut that even LG Display could not turn a profit. 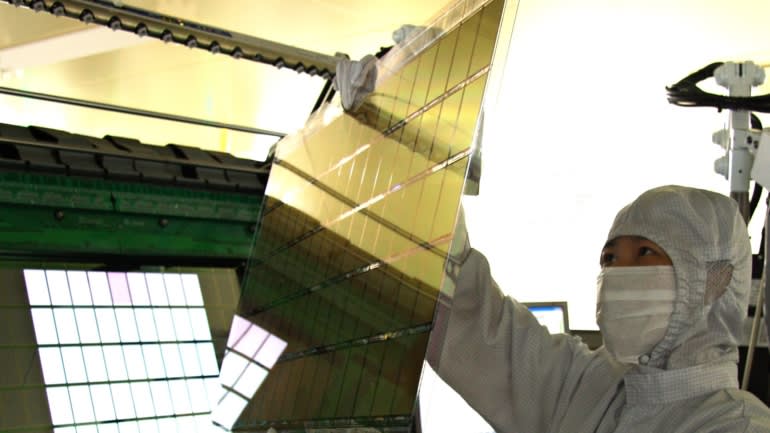 Samsung is moving out of LCDs and into more advanced technologies, including quantum dot OLEDs.  (Photo courtesy of Samsung)

And the Chinese are only getting stronger. BOE Technology and China Star Optoelectronics Technology are increasing market share in large LCD panels used in TVs. BOE and Tianma Microelectronics are doing the same in small and midsize panels for smartphones.

According to U.S. research company Display Supply Chain Consultants, LG Display still holds the top share in large LCD panels, at 24.2%. But BOE, with 19.7%, is closing in. In terms of total production capacity, China surpassed South Korea in 2017.

BOE, China’s largest panel maker, is building new factories at the rate of one a year, fed by government subsidies. For large LCD screens, its technology is already comparable to that of Sharp and Samsung. Tianma, which bought NEC’s LCD business, is making inroads in the market for small and midsize panels for smartphones.

Samsung, South Korea’s other big panel maker, is also feeling the heat, and said on March 31 that it will halt production of large LCD panels for TVs. Samsung will cease operations at its LCD panel factories in South Korea and China at the end of the year. Among the South Korean plants calling it quits is one in Tangjeong. The plant, which began as a joint venture between Samsung and Sony, had been a symbol of Samsung’s LCD prowess in the 2000s, helping make Samsung the world leader in LCD TVs.

Samsung is moving upmarket, focusing on next-generation quantum dot OLEDs. The company plans to invest 13.1 trillion won in the technology and will start mass production at Tangjeong and other factories. Samsung still has the edge in small and midsize OLED panels, but Chinese manufacturers are gaining ground here, too. That has Samsung looking ahead to the next generation of products.

Ten years ago, LG Display and Samsung supplied half the world’s LCD panels, and the two vied with each other for the top spot globally. But as the Chinese close in, both South Korean panel makers are at a crossroads, with LG Display in particularly dire straits.

“The very survival of the company is at stake,” said LG Display CEO Jeong Ho-young. Declining profits in its LCD panel business pushed it into a 2.87 trillion won net loss for the year ended December. That was the company’s second consecutive annual loss and a 16-fold jump from the previous year’s loss of 179.4 billion won.

The company’s strategy of staying in all four major market segments backfired because of the amount of investment required. LG Display now aims to return to quarterly profitability in 2020 by ending production in South Korea of LCD panels for TVs and cutting payroll. 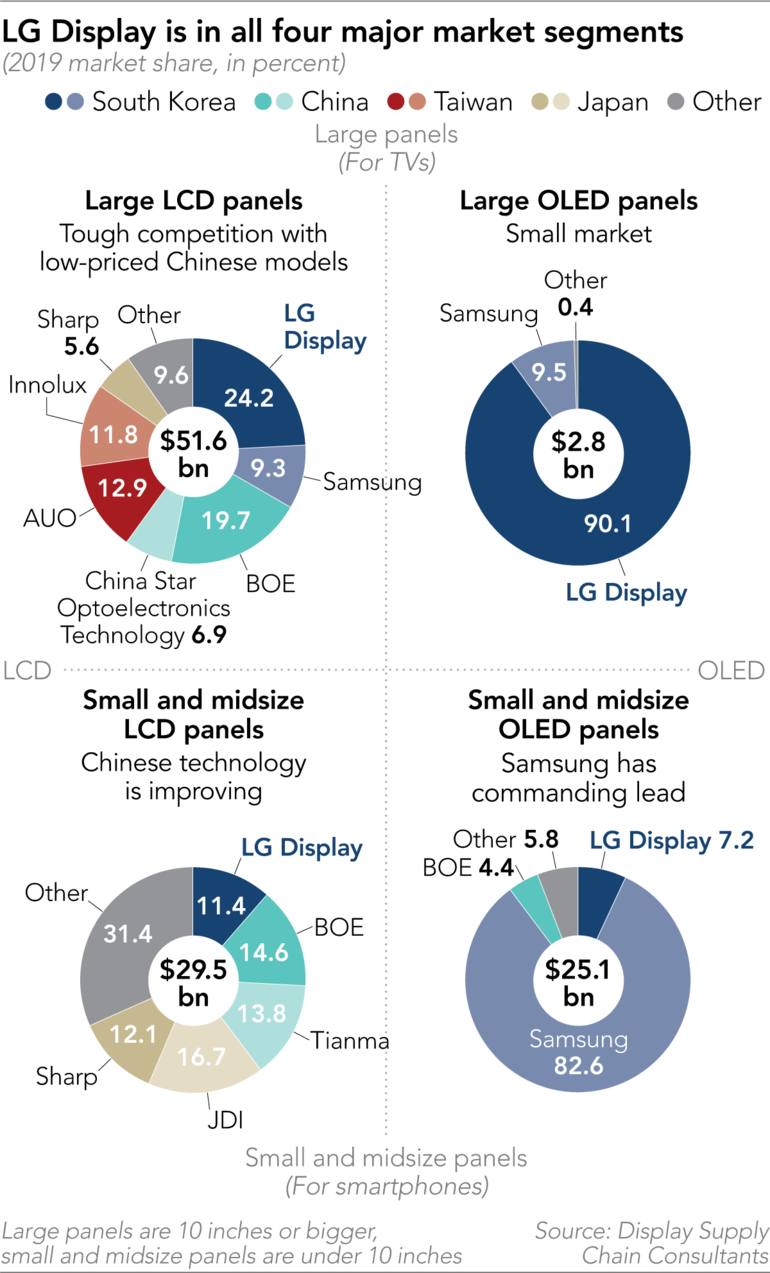 But the company is also facing headwinds in the market for large OLED panels for TVs, where it boasts a 90% share. Of the 287.1 million flat-screen TVs shipped last year, only 3.3 million, or about 1%, were OLED sets, according to U.K. research company Informa. As prices continue to fall, LCD TVs are expected to remain popular. It is unclear whether LG Display can turn its dominance in large OLED panels into a profit engine.

Even in smartphones, where OLED demand is high, the outlook is downbeat as deliveries to Apple miss expectations. Samsung is ahead in mass production, and “its technological lead over LG Display and the Chinese companies won’t be reversed in one or two years,” according to an OLED equipment manufacturer.

For mass production of OLED panels, even more capital investment will be needed than for LCD panels. Compared with Chinese companies, which benefit from government largesse, and Samsung, which is supported by its semiconductor business, LG Display has less money for investment.

Blocked at every turn, LG Display is feeling squeezed. In fiscal 2019, its free cash flow was a negative 4.21 trillion won, its second straight annual outflow. Amid worsening profitability in a capital-spending arms race, the company saw its deficit in free cash flow total 7.13 trillion won since Chinese manufacturers rose to prominence five years ago. The trend will likely continue.

LG Display issued convertible bonds last August but managed to raise only 813 billion won. At the end of 2019, its equity ratio was 35%, 20 percentage points lower than three years earlier.

Still, CEO Jeong remains confident. “We will improve our competitiveness, focused on OLEDs,” he said. Time will tell if his words are well founded or mere bravado in the face of the Chinese onslaught.