HONG KONG — Causeway Bay, the heart of Hong Kong’s retail landscape and the world’s priciest shopping district by rent, was eerily quiet at noon on Thursday.

In an area usually swarming with tourists, shop staffers sat idle, fiddling with their smartphones. The Times Square shopping center was a ghost town, and the plethora of big-name stores in the vicinity stood all but empty.

A lack of import tariffs made Hong Kong a haven for luxury brands from around the world. But as pro-democracy protests and the novel coronavirus pandemic have driven tourists away from a city whose economy relies on them, many companies are deciding that waiting out these crises is no longer worth the cost.

Foreign luxury brands quietly began packing up and leaving last fall as the demonstrations made it harder for them to operate, but the trend has picked up speed this year.

Reports in January of Louis Vuitton’s plans to shutter its flagship Times Square store seemed to touch off an avalanche of closings. Prada moved up its planned shutdown of a nearby store to February from June. Swatch Group brands Omega and Longines closed multiple Hong Kong locations by the end of March.

Just this week, Italian fashion brand Valentino on Monday shut a flagship location at the Harbor City mall in Tsim Sha Tsui — its largest location in Hong Kong — after choosing not to renew its lease. Chow Tai Fook Jewellery Group and cosmetics maker Sa Sa International Holdings, both based in Hong Kong, each plan to close down 15 to 30 stores.

Emily Lee, an analyst at Nomura International, attributed the trend mainly to a dramatic decline in tourism from China, caused by the protests and the coronavirus outbreak.

Hong Kong saw about 51 million mainland Chinese visitors in 2018, an average of about 140,000 a day. But tourism began declining year on year last July as the protests gained steam, and plunged 58% in November amid a major escalation.

Many brands had been prepared to weather the turmoil, anticipating a demand rebound once the situation settled down. But after the coronavirus outbreak began, Hong Kong imposed tough travel restrictions, inbound tourism plunged 96% in February, and the exodus accelerated. 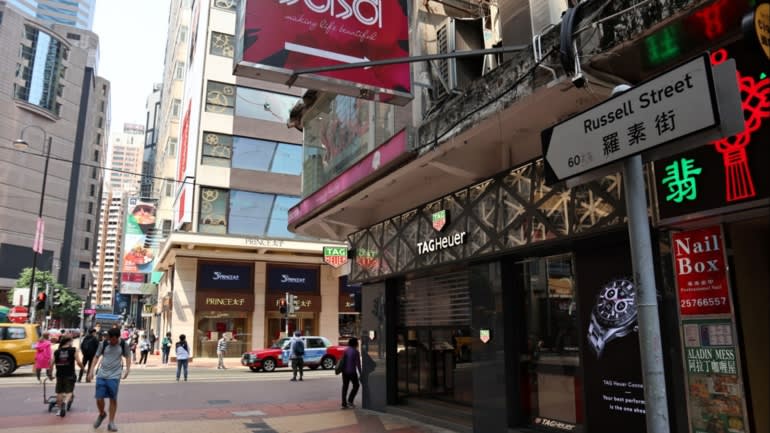 The usual crowds are gone from Russell Street in Hong Kong’s Causeway Bay, the world’s most expensive shopping district. (Photo by Takeshi Kihara)

Without the tourism that made Hong Kong such an appealing market, many companies no longer consider it worthwhile to pay some of the world’s highest rents. Average annual rents in Causeway Bay clocked in at $2,745 per sq. foot in the second quarter of 2019, higher than any other shopping district, a Cushman and Wakefield survey shows.

Big brands had been willing to pay such exorbitant rates because of the sales they raked in. French luxury goods conglomerate LVMH, owner of Louis Vuitton, generated 30% of its revenue last year from Asia outside Japan, more than the U.S. or Europe. The city is also the top import market for high-end Swiss watches.

If tourist flows fail to recover, brands that had maintained 10 or 12 stores in the city will need only four to six, said Luca Solca, an analyst at Sanford C. Bernstein.

Such gloomy predictions may prove optimistic. Even if the coronavirus pandemic is brought under control, the protests may flare up again, as the issues that fueled them have yet to be resolved. Companies such as Burberry are bracing for severe headwinds again this year.

Hong Kong also severed its last public transportation link with neighboring Macao this month, which is likely to largely cut off revenue from tourists who would visit the “shopper’s paradise” of Hong Kong before heading to Macao to gamble. The economic damage to both will be immense.

Even as the tourism pillar of Hong Kong’s economy wobbles, the city is also being overshadowed as a financial hub. Hong Kong sank to sixth place from third in British think tank Z/Yen’s Global Financial Centers Index survey last month, falling behind Tokyo, Shanghai and Singapore. Cities are ranked based on such factors as the business environment, human capital and infrastructure.