KUALA LUMPUR — The term “cash is king” contributed to the downfall of former Malaysian Prime Minister Najib Razak. Now, after slightly over a month on the job, new leader Muhyiddin Yassin appears to be winning over a skeptical public with huge sums of money.

Muhyiddin could not have picked a worse time to become the country’s eighth prime minister. When he took power on March 1, after an internal political coup forced Prime Minister Mahathir Mohamad to resign, the nation was already facing a broad crisis due to the coronavirus pandemic.

Citizens gave Muhyiddin an icy reception. On Twitter, the hashtag #NotMyPM was a trending topic for a week.

“He has managed it well,” Sivamurugan Pandian, a political analyst at the University of Science, Malaysia, said of Muhyiddin’s crisis-filled first 30 days in office. “He has given a sense of leadership to the nation.”

Initially, many citizens felt they had been robbed of their votes in the historic May 2018 election. During the campaign, the nonagenarian Mahathir alleged that a corrupt Najib had used the phrase “cash is king” to suggest money can buy anything, including public support. This helped end the 61-year rule of Najib’s National Front coalition. 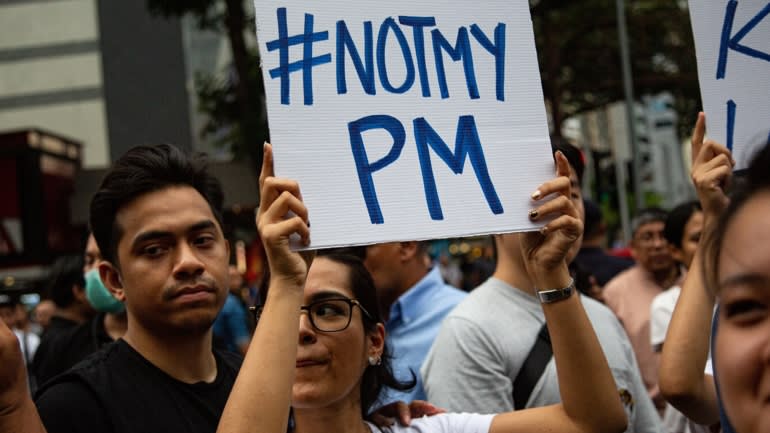 Less than two years later, members of Mahathir’s own Malaysian United Indigenous Party, or Bersatu, and leaders of the National Front banded together to overturn the result. Muhyiddin, Mahathir’s erstwhile ally, rose to power.

Some critics have blamed the coup for diverting the government’s attention from the coronavirus and allowing the outbreak to worsen. Malaysia’s 4,119 cases, as of Wednesday, are the most in Southeast Asia so far.

Even Muhyiddin acknowledged the sentiment against him on March 27: “This government may not be the government that you voted for,” he said, “but I want all of you to know that this government cares for you.”

He put the government’s money where his mouth was.

The prime minister announced an unprecedented economic stimulus package that brought the total relief spending to $58 billion. His plan far surpassed Mahathir’s initial $4.8 billion response to the crisis and included $2.3 billion in cash handouts to low- and middle-income Malaysians.

While Mahathir sought to put the nation’s fiscal house in order before the crisis, Muhyiddin has spared no expense. His coronavirus aid ranges from one-off payments for households earning less than $1,836, along with cash aid for ride-hailing and taxi drivers, students and single adults. All households and industries are eligible for electricity rebates. Tourism and leisure businesses get tax breaks, while ordinary citizens and small and midsize enterprises get six-month loan moratoriums.

Some say Muhyiddin hit the “sweet spot” with ordinary Malaysians. This week, he introduced an additional $2.29 billion in measures for smaller businesses.

Oh Ei Sun, a senior fellow at the Singapore Institute of International Affairs, called Muhyiddin a “survivor” but argued he should not be given too much credit. “It is perhaps not very fair to judge his performance in the past month, as he was doing only what was necessary for the people,” he said. “Even if [Mahathir’s coalition] Pakatan government was still in power, I assume the strategies would have been similar.”

With the stimulus measures, Sivamurugan said, the premier put the country’s political crisis aside and “focused on health and the economy.” He called this a “wise move” because the public is quick to criticize anyone who seems to be “playing politics” amid the pandemic.

Either way, the two experts agree that Muhyiddin still has his work cut out for him. 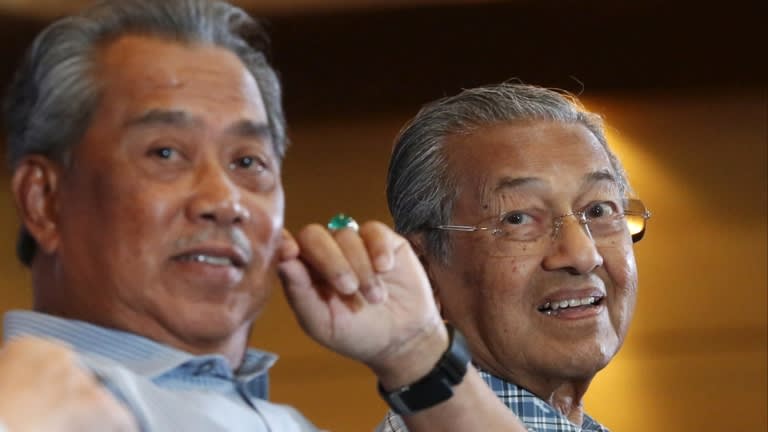 Muhyiddin and Mahathir Mohamad in happier times, when they were looking to oust Najib’s government.

Despite a national lockdown since mid-March, virus cases continue to rise. The stimulus package will cushion but not avoid dire economic consequences. Many businesses of all sizes are at risk of closure. Lower-income households will bear the brunt of the pain as unemployment surges.

The first step is to ensure people can actually access the assistance on offer. “Muhyiddin still has to work on the bureaucratic hurdles faced by the people to get help, by simplifying processes,” Oh said. “Corruption is also an issue still.”

Also worth noting is that Muhyiddin leads a weak, ethnic Malay-controlled coalition that could struggle to heal a scarred, divided, multi-ethnic nation once the pandemic subsides.

In Malaysia’s complicated political web, Muhyiddin was a deputy president of Najib’s party, the United Malays National Organization (UMNO), until Najib sacked him in 2015. Muhyiddin had objected to the then-prime minister’s handling of the scandal-tainted state fund 1Malaysia Development Berhad.

Muhyiddin and Mahathir went on to form Bersatu.

Now the ruling coalition consists of two-thirds elected representatives from Bersatu alongside the former opposition bloc of the UMNO and the Malaysian Islamic Party (PAS).

Muhyiddin has stressed that he is a prime minister for all, and reintroduced a ministry dedicated to national unity. But he is relying partly on the support of a party — PAS — that has in the past proposed an Islamic penal code and promoted unilateral conversions of minors without the consent of both parents.

“The bottom line,” Sivamurugan said, is that the “well-being of the masses, regardless of their social class status, will be affected” by the coronavirus. The prime minister will “face the challenge of bringing [everyone] back together in a divided nation, as the social structure or foundation of this country is a multi-ethnic mosaic.”