YANGON — Seven banks from around Asia are to enter Myanmar, raising the prospect that a more active presence by foreign lenders will encourage further inward investment from other industries.

The banks’ entry was approved late last week by the Central Bank of Myanmar and are part of efforts to open up the banking industry by the administration led by State Counselor Aung San Suu Kyi.

They are expected to start Myanmar operations by early 2021 after a licensing procedure.

One of the banks, Siam Commercial Bank, a top-three bank in Thailand, said it would initially focus on Thai corporate clients with investments in the country “and others who want to expand their trade and investment in Myanmar.” Arthid Nanthawithaya, CEO and chairman of the executive committee, said in a statement: “We are ready to serve clients with a full range of financial solutions like loans, foreign exchange, trade finance, supply chain management and cash management.”

In a statement, the central bank’s licensing committee said it “looks forward to all applicants’ continuous involvement in the development” of Myanmar.

Myanmar’s government has relaxed regulations on foreign financial companies in phases since 2018. 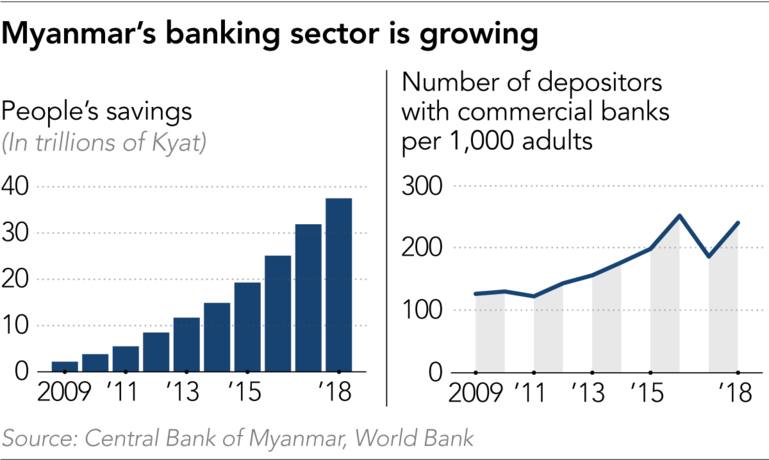 In November 2019, it introduced a “subsidiary license” system in which it gives banking licenses to local subsidiaries of foreign banks, allowing them to offer financial services targeting retail customers. The licenses allow such subsidiaries to offer a range of services — from accepting deposits to providing loans — similar to domestic banks.

Before 2019, Myanmar had a “branch license” system for foreign banks that limited holders to operate only services targeted at corporate customers. In that year, the country shifted from a policy to protect domestic banks from international rivals to a policy of encouraging competition. The Myanmar authority also abolished a 35% limit on foreign banks’ ownership in local banks, paving the way for their acquisition by foreign banks.

The entry of more foreign banks will mean more options for depositing money for Myanmar’s emerging industrialists and middle-income earners, whose numbers are growing as the economy expands. According to central bank statistics, people’s cumulative savings came to 37.5 trillion kyat ($26.5 billion) at the end of 2018, 2.5 times more than four years earlier.