WELLINGTON — New Zealand on Monday announced it will relax some of the most stringent coronavirus controls introduced anywhere in the world, after successfully limiting the spread of the disease.

Key industries will emerge from a month-long hibernation next week, potentially showing other countries a path to getting back to business. Within New Zealand, however, there is a growing realization that the economic pain is just beginning, especially for the critical tourism sector.

Prime Minister Jacinda Ardern announced the country would move from a “level 4” lockdown to less strict “level 3” restrictions on April 28. The government plans to review the results of the new level on May 11.

“The director-general of health is confident there is no widespread undetected community transmission in New Zealand,” Ardern said during a media briefing broadcast on Monday. She said that the chain of transmission had been “broken” and that New Zealand had “taken a quantum leap forward in our goal to eliminate the virus.”

Construction and manufacturing are among the sectors set to reopen. Some restrictions on people’s movements and activities will be also be lifted.

Since March 26, only supermarkets, grocery stores, pharmacies and gas stations have been operating. The country’s 5 million residents were instructed to stay home except for a few working in essential industries, such as food production.

Ardern’s leadership has been widely praised for uniting the country against the virus: Despite being confined at home, except to join long supermarket lines, 84% of New Zealanders supported the lockdown, according to a poll by market research agency Colmar Brunton earlier this month.

The country’s location — far from the hardest-hit Northern Hemisphere nations — surely helped. But it is hard to argue with the numbers. As of Monday, there have been 12 coronavirus deaths in New Zealand and a total of 1440 cases, of which 974 have recovered. These are among the lowest mortality and infection rates in the world, Ardern noted in her briefing.

New reported infections have dropped from a daily high of 89 in early April to fewer than 10 in recent days.

The level 3 rules will keep some parts of the economy closed, including restaurants, bars and most retailers. Most people, including students, will still be expected to work from home where possible. Nevertheless, the easing will come as a relief to many. 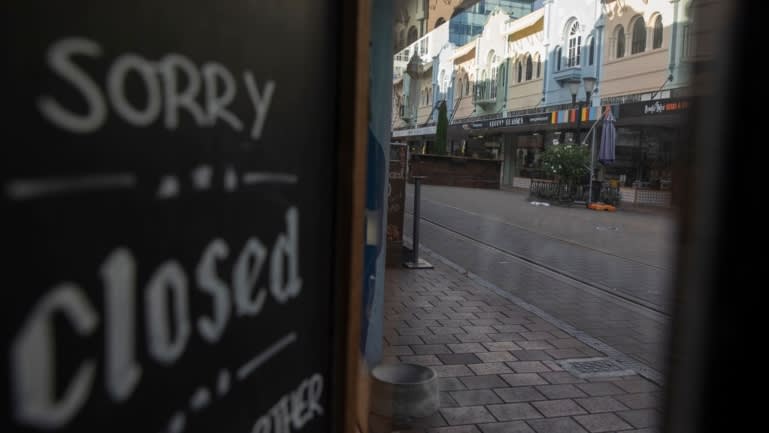 A shop displays a closed sign on an empty street in Christchurch, New Zealand. Restaurants, bars and most retailers will have to stay shut even after restrictions are eased.

The Treasury — New Zealand’s finance ministry — estimated the more stringent measures under alert level 4 would slash economic output by 40%, compared with 25% under the new level.

So far, the blow has been cushioned by a NZ$20 billion ($12 billion) assistance package from the government, including around NZ$10 billion in wage subsidies. The central bank also acted quickly, cutting its benchmark interest rate to a record low 0.25% from 1.0% on March 16. At the end of March it said it would undertake quantitative easing for the first time by buying up to NZ$30 billion in government bonds over the next year.

The markets appear cautiously optimistic. The NZ50 headline stock market index plunged by a third in late March, but has since recovered about half its losses. The New Zealand dollar fell by about 10 U.S. cents to 0.5673 in March before recovering to around 60 cents.

But some economists estimate another NZ$20 billion to NZ$30 billion in government assistance will be needed in the coming months.

Despite the wage subsidies, the number of people seeking unemployment benefits has risen by more than 20,000, to over 165,000, since the lockdown started. Many small business owners worry whether they will go broke before they can reopen their doors.

The outlook for New Zealand’s top export industry — tourism — remains bleak. The country’s borders were closed to foreign nationals on March 20 and will stay shut under the new restrictions.

Before the pandemic, tourism was expected to bring in NZ$18 billion in 2020. “Now, I’d suggest that we may now get NZ$6 billion,” said Chris Roberts, chief executive of the main industry organization, Tourism Industry Aotearoa.

Education for foreign students — a business worth about NZ$5 billion annually — will also be crippled this year.

The prospects for other major export sectors such as dairy, meat and horticulture are less grim. “Underlying demand for food will always be there, at least in some form, even during a massive global shock,” said Stephen Toplis, head of research at Bank of New Zealand.

Finance Minister Grant Robertson is to announce further economic assistance measures in his May 14 budget. “The budget will be a recovery budget,” he told business leaders this month. “We will devote much of our resources to kick-starting this recovery.”

Robertson has denied claims by some executives and politicians that the government is sacrificing the economy with its aggressive approach to fighting COVID-19, vowing to “control the virus and come out the other side, ready to build our nation again.”

New Zealanders will be able to pass judgment on the government’s strategy in national elections due to be held on Sept. 19.