NEW YORK — Much like the patchwork efforts made to shut down U.S. cities and states, the push to reopen American economic activity also will be complicated by political division, as priorities and perceptions of the pandemic differ among governors based on their level of consensus with President Donald Trump.

“The governors are going to be opening up their states,” Trump said at the White House’s daily coronavirus briefing Tuesday. “They’re going to declare when. They’re going to know when. Some can open very, very shortly, if not almost immediately.”

Trump reversed his claim made just a day prior that he held ultimate authority over U.S. states on when and how to reopen. And that claim itself apparently contradicted his reasoning given earlier for not issuing a nationwide lockdown order, which involved the need to respect the constitutional rights of states.

Among countries hit hardest by the coronavirus pandemic, only the U.S. lacks a national lockdown policy, even as the daily American death toll surges past 2,000. China, Italy, Spain, France, Germany and the U.K. all imposed such a lockdown before deaths topped 100 daily.

The nation’s economy will be crucial to Trump’s reelection bid in November, and the Republican president views restarting business activity as a priority. Despite his reluctance to impose a national lockdown, Trump intended his administration to be the arbiter of when states can reopen. 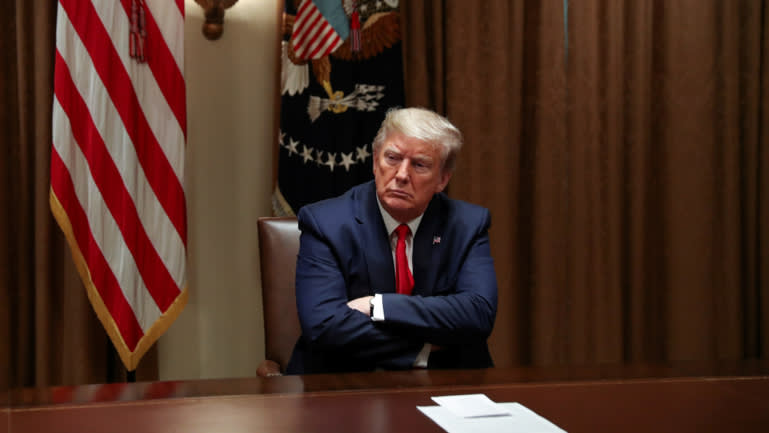 U.S. President Donald Trump listens during a meeting with health care executives in the Cabinet Room at the White House on April 14.

“When somebody’s the president of the United States, the authority is total,” he asserted Monday. “And that’s the way it’s got to be.”

The remarks prompted immediate resistance from governors. New York Gov. Andrew Cuomo, who has drawn national attention for his leadership in the epicenter of the U.S. outbreak, on Tuesday morning disputed Trump’s authority and showed a willingness to defy a federal order to reopen earlier than what is deemed safe.

“We don’t have a king. We have a president,” the Democratic governor said in a televised interview. “I’m not going to allow anything bad to happen to the people I represent.”

Over the weekend, New York formed a consortium with six other northeastern states including neighboring New Jersey and Connecticut to coordinate efforts toward reopening economic activity.

Trump also drew ire from some Republican governors, as New Hampshire’s Chris Sununu and Mike DeWine of Ohio also disputed the president’s authority over states on the issue.

But governors who align more closely with Trump appear eager for a speedy restart of the economy even without federal instruction.

Following Trump’s announcement Monday of a council to reopen America, Florida Gov. Ron DeSantis unveiled his own task force for a reopening.

A return to pre-coronavirus life is “going to be very, very close, maybe even before the date of May 1,” DeSantis said.

The Republican governor, who was relatively slow to lock down his state, has already allowed World Wrestling Entertainment to resume streaming live matches this week by granting it essential business status, putting the company in the same group with grocers, banks and hospitals.

Florida is a popular destination for spring break, a week in March when many college students nationwide travel to places famous for partying. The partying on Florida’s beaches continued as usual this year. 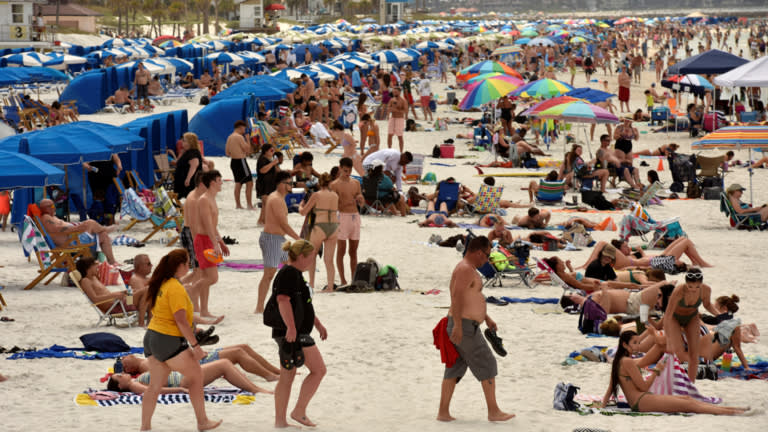 People seen crowding the beach in Clearwater, Florida on March 17, while other jurisdictions had already closed theirs in efforts to combat the spread of novel coronavirus disease.

“If I get corona, I get corona,” a defiant young man told a reporter in an interview that went viral. DeSantis did not close beaches statewide until April 1, when he issued a stay-at-home order.

Florida now has over 21,000 confirmed cases of COVID-19, with 571 deaths, including 97 in Palm Beach, a retiree-rich county where Trump is a registered resident.

Though acceptance of the threat posed by the coronavirus has now largely gained a bipartisan consensus, a survey by Pew Research Center in mid-March showed that only 33% of Republicans at the time believed the pandemic was a major threat to the U.S. population, compared with 59% of Democrats.

The lack of a federally coordinated effort to shut down nonessential activities has led local policies on social distancing to fall along party lines. While Democratic-leaning “blue states” like California and New York acted comparatively early, introducing stringent measures in March, many other places did not respond until much later.

Among the states that voted for Trump in 2016, Ohio was one of the earliest to introduce a statewide stay-at-home order, which took effect March 26. Ohio has 7,285 confirmed cases as of Wednesday, or just half of less-populous Georgia, which did not go into lockdown until April 4.

When Gov. Brian Kemp of Georgia, a Republican stronghold, announced the belated policy, he claimed to have learned of asymptomatic spread of the virus only within the previous 24 hours. By that time, confirmed cases in the Southern state were already approaching 5,000.

Gov. Kristi Noem of South Dakota, where no stay-at-home order has been issued, dismissed the notion of a nationwide lockdown as a product of “herd mentality” because states like hers are “not New York City.”

South Dakota lets individuals “exercise their right to work, to worship and to play,” the Republican governor said earlier this month.

The rural state’s case count has exploded to 3,429 from just 393 a week ago, among a population of less than 1 million. The death toll there climbed to 97. A jogger wearing a mask runs along Brooklyn Bridge Park during the coronavirus pandemic in New York. Known as “The City That Never Sleeps,” New York’s streets are particularly empty during the pandemic.

The gaps in social distancing policies across the U.S. highlight the tension between local and federal governments, as well as the lack of coordination.

In some places, public opinion may be turning against the White House due to its response. A poll released last week by the University of North Florida shows that 53% of the state’s voters disapprove of the job Trump is doing.

“[M]ayors and local government have filled the leadership void and been rewarded with high levels of support” rather than Trump and DeSantis, said Michael Binder, director of the university’s public opinion research lab.

Dr. Anthony Fauci of the National Institutes of Health received the highest approval rating among officials on the White House coronavirus task force, at 85%. Yet Trump is suspected of wanting to fire Fauci from his post.

The university’s poll also addressed the U.S. presidential election in November, as 46% of Florida voters indicated they would support former Vice President Joe Biden, the presumptive Democratic nominee, while 40% backed Trump. Florida receives 29 electoral votes, behind only California and Texas and on par with New York.

Also showing signs of slipping away from Trump’s grip is Wisconsin, a Midwestern battleground state he won by a narrow margin in 2016. Jill Karofsky, a local Democratic judge, defeated a conservative incumbent on the Wisconsin Supreme Court by 11 percentage points in the April 7 election.

The upset victory came in an election that state Republicans insisted on holding without a postponement or special allowances to submit ballots by mail — despite a raging pandemic. The outcome appears to give Democrats a boost ahead of the November general election.

“You do not understand the panic which will set in at the White House, at the [Republican National Committee], at Trump HQ” upon Karofsky’s victory, tweeted John Weaver, a political strategist who has worked on the presidential campaigns of George H.W. Bush and John McCain — both Republicans.