DALIAN, China — At a hotel in Shanghai, a staffer placed a packaged meal into a robotic waiter and entered the room number of a suspected coronavirus patient on the waiter’s touch screen. The robot then automatically made its way to the room.

“Please take your meal,” the robot said, notifying the guest to take the bento box — eliminating the need for human-to-human contact.

The coronavirus pandemic is boosting demand for robots in China’s service sector, where automation is helping restaurant and hotel operators navigate staffing shortages and infection risks.

The robot used by the Shanghai hotel was developed by Keenon Robotics, founded in that city in 2010. The startup’s products are equipped with advanced sensors that allow them to safely maneuver around people and obstacles, and are used in hotels and hospitals across roughly 400 cities nationwide.

Since the coronavirus began spreading widely in late January, Keenon has shipped about 100 units to medical facilities in Hubei Province and elsewhere. “We sold about 3,000 units in 2019, but demand among hospitals has surged in 2020 and we are aiming to top 10,000 units,” a company spokesperson said. 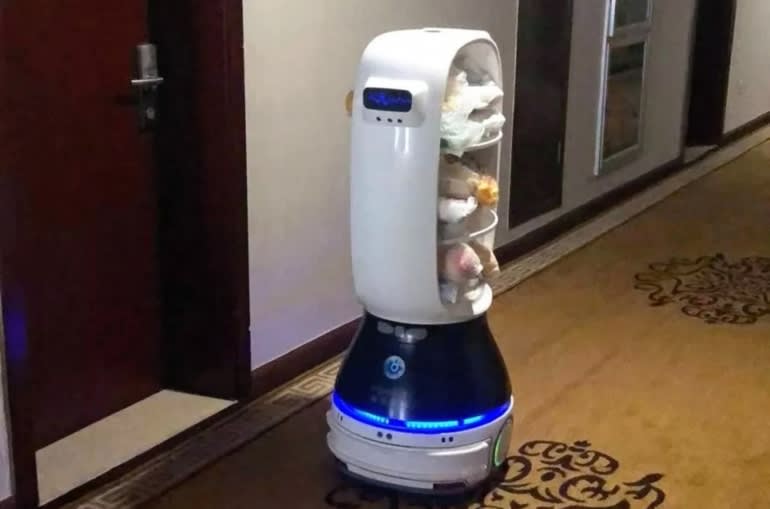 Keenon is partnering with food delivery app operator Meituan Dianping to expand into restaurants. The robots are priced at around 58,000 yuan ($8,220) each, “affordable not just for large chains but also for mom-and-pop restaurants,” the Keenon spokesperson said. They could save businesses money in the long run, since they can serve 300 to 450 meals a day — far more than human staffers.

Big-name players are throwing their hats into the ring as well. Siasun Robot & Automation donated food and drug delivery robots to hospitals in its home province of Liaoning in February. E-commerce giant JD.com deployed autonomous delivery vehicles to Wuhan, the epicenter of the outbreak, to distribute medical supplies and daily necessities.

Robots until now have largely been confined to factories and warehouses. But they are starting to spread into spaces with busy human traffic, thanks to advancements in autonomous technology like those used by self-driving cars and a surge in interest from the coronavirus outbreak. Huazhu Group was able to get about 90% of its 6,000 hotels back in operation as of February thanks to delivery robots from Yunji Technology.

China has been one of the most aggressive adopters worldwide. The Chinese Institute of Electronics projected that Chinese sales of service robots would jump 33% in 2019 to $2.2 billion, growing more than twice as quickly as worldwide sales.

Almost half the robots sold in China go to households in the form of vacuum cleaners and other devices, while medical- and retail-use robots each account for less than 30%. “Demand will increase even further” particularly in emerging fields, said Hao Yucheng of the China Robot Industry Alliance.

The boost in robotics is fueled partly by a surge in labor costs. The average annual wage in China increased 60% in five years to 82,413 yuan in 2018, according to the National Bureau of Statistics. Other Asian countries could also see heightened demand for robots as wages rise.

Businesses were already experimenting with automated stores before the coronavirus struck, in an effort to alleviate labor shortages and to collect troves of data that can be used in product development and marketing. While concerns about privacy remain, the outbreak has shed light on the value of automation and could fuel further efforts to cut prices of service robots and boost their capabilities.