NEW YORK — U.S. stocks surged on Monday after the governors of New York and New Jersey, two key East Coast states suffering from the coronavirus outbreak, both said they saw tentative signs of a “flattening” of the curve.

At his highly watched daily press briefing that began shortly after noon, New York Gov. Andrew Cuomo said new COVID-19 cases and deaths in his state had stayed relatively flat over the weekend, while new hospitalizations were down, signaling a potential plateauing of the outbreak in the U.S. epicenter.

The state’s death toll of 4,758 was up from the previous day’s 4,159, but the curve was “effectively flat for two days,” Cuomo said. “While none of this is good news, the flattening, possible flattening, of the curve is better than the increases that we have seen.”

In neighboring New Jersey, the state with the second-highest number of cases and deaths, Gov. Phil Murphy said in a briefing that “our efforts to flatten the curve are starting, and I say starting, to pay off.” The 12% increase in cases he cited Monday was down from the 24% increase of March 30.

The Dow Jones Industrial Average rose 1,627 points to close at 22,679. The Dow had already started the day strong, gaining over 800 points at the market open, as stocks in the U.K. and Germany had risen 3.1% and 5.8%, respectively. European stocks had ended positively as the pace of deaths in Italy and Spain slowed.

But the ascent in New York took on new momentum minutes after Cuomo began speaking and gained further tailwinds as Murphy spoke later in the afternoon. 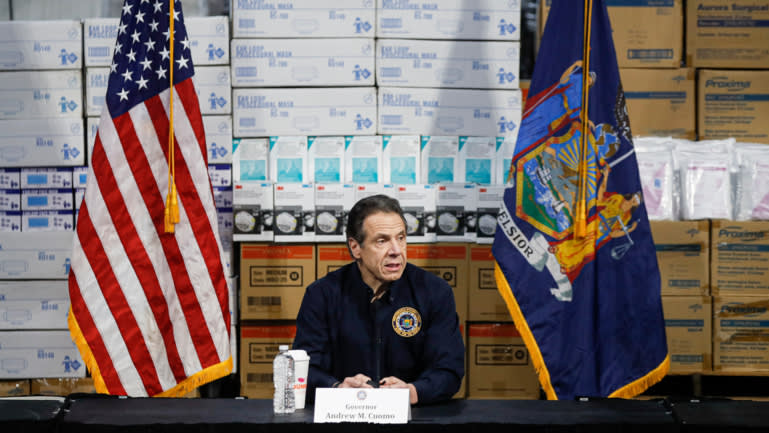 Stocks that were battered heavily last week were the focus of the buying, with Boeing jumping 19.5% and American Express rising 14%.

“The biggest contributor was that both in Europe and the U.S. we saw a rollover in the number of new cases per day,” he said.

At the same time, the stabilization of the U.S. treasury market from a previous round of panic selling and the fact that the federal government’s support program for small businesses has started to function, also likely played a big part, according to Alpert.

“Now that the banks are taking applications, there’s some realness to” the stimulus package, he said.

Cuomo’s cautiously hopeful message, studded with caveats, came as many anxiously looked for signs of hope and amid concerns that other emerging U.S. hot spots will soon face New York-style ordeals.

After weeks of warning about the nightmare scenario of running out of ventilators, Cuomo hinted Monday of an easing of the situation, saying that no one had died from a lack of capacity and that “we don’t need any additional ventilators right now.”

He received much needed help from California Monday as Gov. Gavin Newsom announced that the West-Coast state would lend 500 state-owned ventilators to the Strategic National Stockpile inventory, to help states like New York.

“California is stepping up to help our fellow Americans in New York and across the country who are being impacted the hardest right now by the COVID-19 pandemic,” Newsom said. “We still have a long road ahead of us in the Golden State – and we’re aggressively preparing for a surge – but we can’t turn our back on Americans whose lives depend on having a ventilator now.”

Days earlier, he said he would use the National Guard to seize ventilators and other unused equipment from upstate hospitals.

But the state’s hospitals are running at an unsustainable maximum level, with more waves of patients expected to come in.

New York’s latest daily surge in deaths from the novel coronavirus — 599, compared with 594 the day before, or nearly two per minute on average — points to a higher figure per capita than Italy’s peak.

Data on the New York outbreak suggests a curve lower than the projections the Cuomo administration has been operating on in preparation for the apex — a positive, though preliminary, development the governor attributed to social distancing.

Even in the event of a plateau or apex, social distancing must continue to be enforced, the governor said.

Over the weekend, thanks to sunny weather and more than two weeks of staying at home under a statewide order, some New Yorkers seemed to have eased up on social distancing, with many out and about in parks and on the streets in warmer weather.

“Now is not the time to slack off on what we’re doing,” he said. Shutdowns of schools and nonessential businesses have been extended to April 29, and the maximum fine for social distancing violations has been doubled to $1,000, Cuomo announced.

As infections potentially start to level off in states that were caught up in the pandemic early on, including New York and California, new hot spots are also emerging in the U.S., such as New Orleans in Louisiana and Detroit in Michigan.

Detroit reported Sunday its largest daily spike in coronavirus deaths so far at 38, bringing total fatalities to 167. The city has a population less than 700,000.

Down South, Louisiana recorded nearly 15,000 total cases, including 512 deaths, out of a population of less than 5 million.

Boston Mayor Marty Walsh on Sunday introduced curfew guidelines, saying the city — with 1,877 confirmed cases as of that day — is only at the “beginning of the surge.”