PALO ALTO, U.S. — For the past month, a lengthy spreadsheet has been circulating among Chinese users of the WeChat messaging app living in California.

Created by a group of anonymous volunteers, the document contains a list of QR codes for special WeChat chat rooms, organized by zip code. Users find their neighborhood, scan the corresponding code to join the room — and then hopefully never have to use it.

“The group is for sending SOS messages when you are in an emergency situation ONLY,” reads the announcement posted in one such group. “Just send SOS and the address to the group, your neighbors will come and help you.”

The WeChat groups were created in response to the rise in anti-Asian hate crimes in wake of the coronavirus outbreak — and they are just one example of how China’s massive internet platforms are being harnessed by overseas users to combat with a global crisis.

As the pandemic grows more severe outside of China, Chinese tech giants led by Baidu, Alibaba and Tencent — known collectively as BAT — are finding new and vital uses around the globe.

WeChat, operated by gaming titan Tencent, has more than 1.1 billion users. The broad user base is exactly what some of its users in California are betting on to help them stay safe.

To date, more than 1,100 reports of coronavirus discrimination against Asians have been reported to the Asian Pacific Policy and Planning Council since March 19, among which 31.8% incidents happened in California, a state known for its high-tech hub and a large population of Asian immigrants.

“The messaging groups are like a self-help buddy system… Your neighbors living in the same zip code might be able to come and save your life, even before first responders do,” said one of the organizers of the WeChat SOS groups, who asked to be identified only by her surname Si. 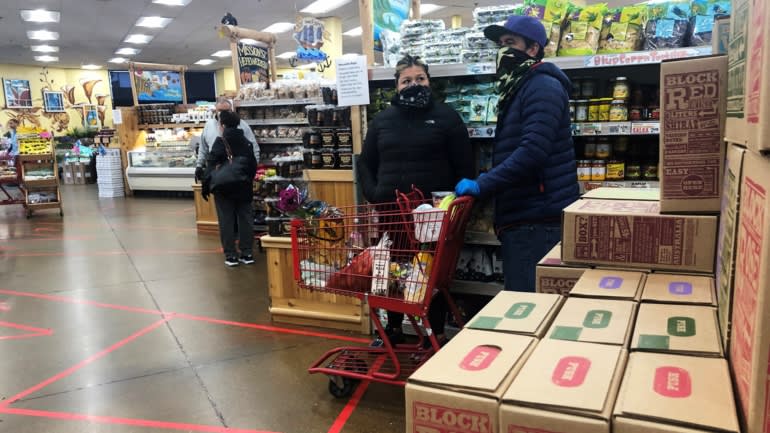 Shoppers in California wear masks and practice social distancing. As cases of coronavirus have risen in the U.S., so have reports of anti-Asian hate crimes.

More than 100 SOS groups have been created for neighborhoods in Silicon Valley alone, covering nearly all ZIP codes in the area, according to the spreadsheet the Nikkei Asian Review examined.

According to Si, more than 2,000 people have joined one of the Silicon Valley area SOS WeChat groups, and more group chat rooms are being created daily to meet the growing demand from Chinese in the area who are becoming increasingly concerned about their safety, as reports of violent and non-violent racism activities targeted at Asians increase.

“I hope those WeChat groups will never be used, but we need to be prepared for the worst,” said Si, adding that she has not seen any incident being reported in the WeChat groups she manages.

The services of Tencent, Alibaba and Baidu have been enlisted in China to help combat the coronavirus since January. From cloud-based artificial intelligence to chatbots and even “nurse robots,” Chinese tech companies are deploying their wealth, technological prowess and massive databases to join the country’s effort to contain the outbreak.

But now their services are more needed overseas. As life starts to return to normal in China, the COVID-19 pandemic continues to ravage much of the rest of the world, including New York, the new epicenter of the pandemic.

“When you need something in this desperate time, WeChat might be the most effective platform you can turn to for help,” said Jack, a resident doctor in New York, who has been posting in WeChat about the lack of personal protective gear at the hospital where he works since mid-March. Coronavirus cases in New York have surged over the past weeks, straining medical facilities.

After seeing Jack’s WeChat posts, a group of Chinese volunteers have managed sourcing over 2,000 surgical masks and delivered them to his hospital within days, Jack, who asked to use only his first name, told Nikkei.

Luo Qimei, a public relations director at a startup in Cupertino, said she raised more than 280,000 yuan ($40,000) through her WeChat network within three weeks. The donations have been used to purchase personal protective gear from Asia and ship it to hospitals in New York and California, Luo said, adding that she updates her WeChat connections on where the money has gone to on a daily basis.

“The donations came from everywhere, without the boundaries of borders, and they are actually saving the lives of front-line workers,” Luo said.

The power to connect millions of users instantly has made WeChat a powerful tool in combating the pandemic. But the very size of popular social media platforms leaves them vulnerable to another rapidly spreading danger: fake news.

For overseas Chinese, WeChat groups have become go-to information hubs for staying on top of the latest developments regarding the coronavirus.

“I check my WeChat app every morning before I check the news,” said Tokyo-based WeChat user Xie Wei. “Chances are someone has probably already posted about it on WeChat before anything hits the news,” Xie added.

Like Xie, WeChat users around the world exchange tips about coronavirus prevention, the latest confirmed cases in the area, and other useful daily updates such as whether nearby grocery stores and restaurants are still open.

But there are also billions of unconfirmed postings, and rumors spread as fast — if not faster than — legitimate information.

“I’ve heard rumors about Tokyo being locked down on WeChat at least five times since January, and every time it was from some WeChat posts my parents saw, and then they would panic and ask me to come back home before the airports are shut down,” Xie said. “Every time I have to calm them down and tell them it’s fake news, but next time they will still believe whatever they see on WeChat.”

Tencent did not respond to questions about how the messaging app is dealing with COVID-19 misinformation spread in the platform, though the company did launch a campaign against fake coronavirus news through its Tencent News platform in January.

Misinformation has been a headache for any social media platform with a sizable user base, especially during the time of crisis. For that reason, a group of the biggest technology companies in the U.S., including Facebook, Google and Twitter, announced in March a joint effort to fight coronavirus-related fraud and misinformation.

While users drive new uses at WeChat, Alibaba and Baidu are themselves rolling out services specifically aimed at helping overseas users get through the pandemic.

Baidu, for example, introduced a new feature in its “Ask Doctor” service to connect people outside China with Chinese-speaking doctors. The online diagnosis platform comes in handy for overseas Chinese who are having trouble communicating with local doctors or for those who simply do not want to go to the hospital at a time when worldwide health systems are overloaded with COVID-19 cases.

Yu Lin, a salesperson in Madrid, said she has been stressed by the lockdown in the city and the daily rise in the number of confirmed cases. But Yu did not want to worry her family and friends by venting too much to them, and offline therapy sessions were not an option. So she connected with an online therapist via Baidu “who calmed me down and suggested cardio exercise as a way to release stress,” Yu said.

Yu is just one of the more than 300,000 people from overseas who have consulted Baidu’s “Ask Doctor” platform by the end of March, a Baidu spokesperson told Nikkei, adding that the U.S. has the most users seeking help. Colon square in Madrid stands nearly empty on April 5, as the city endures a strict lockdown to combat the coronavirus.

Meanwhile, Alibaba Group, the e-commerce giant, has been offering a similar free online doctor counseling service through its fintech platform Alipay, which has over 1.2 billion users across the world.

Medical professionals in China, especially those who have the front-line experience dealing with coronavirus, are encouraged to sign up to Alibaba’s overseas Chinese health consulting platform, to share tips and answer questions about the pandemic.

More than 700 doctors have signed up at Alibaba’s coronavirus health consulting platform in China, among whom 100 are medical professionals who have worked in Hubei Province, the epicenter of coronavirus outbreak in China, according to the company.

More than 200 Chinese embassies and consulates have listed Alipay as a recommended platform for seeking medical help.

The company said over 100,000 users outside China have consulted doctors through the platform since it launched the service in early March.

“Alibaba Group hopes to lend a helping hand to Chinese overseas, no matter where they are,” the company said in a statement. “Together we can defeat the coronavirus.”