TAIPEI — Operatives in mainland China attempted to paint Taiwan as the source of online abuse against the head of the World Health Organization, Taiwanese authorities said Friday, as the coronavirus pandemic spotlights cross-strait tensions.

A flurry of tweets purporting to apologize on behalf of Taiwan for attacks on WHO Director-General Tedros Adhanom Ghebreyesus are strongly suspected to have come from China, according to Chang Yu-jen, head of the information security department of Taiwan’s Investigation Bureau.

Tedros told a news conference Wednesday in Geneva that he has been the target of threats and racial slurs from Taiwan for three months. Taiwan’s Ministry of Foreign Affairs knew about the attacks yet did not distance itself and “even started criticizing me,” he said.

Taiwanese President Tsai Ing-wen and the ministry have denied the allegations.

Shortly after the news conference, more than 40 Twitter accounts claiming to be Taiwanese made a total of more than 100 posts admitting to and apologizing for the abuse, Chang said. Some even posted partial photos of Taiwanese health insurance cards as evidence of their origin. 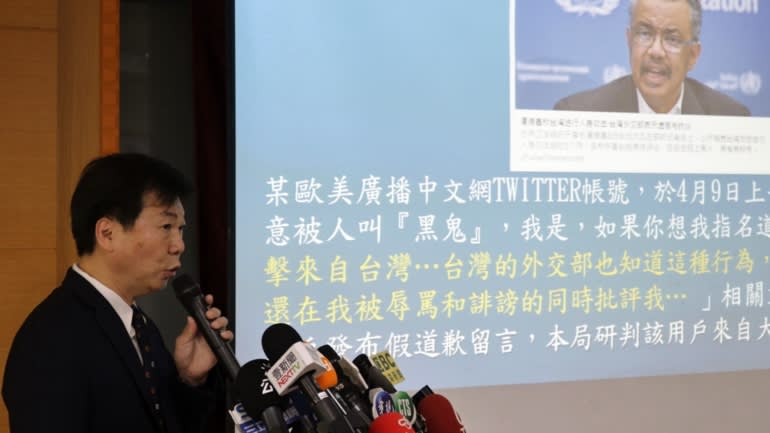 Yet past posts on these accounts used forms of written characters seen on the mainland but not in Taiwan, suggesting that they were from China, Chang said.

While the bureau has been unable to trace the IP addresses of these posts, “this is clearly disinformation,” he said.

A spokesperson for China’s Taiwan Affairs Office on Thursday accused Taiwan’s ruling Democratic Progressive Party of “political manipulation” and “conniving in the wanton spread of racist remarks by the internet mob from its camp,” in the words of China’s state-run Xinhua News Agency.

The party has used the pandemic to push a pro-independence agenda, the spokesperson said.

Taiwan has been blocked from participating in the WHO by China, which considers the island a breakaway province. “For years, we have been excluded from international organizations, and we know better than anyone else what it feels like to be discriminated against and isolated,” Tsai said in a Facebook post rebutting Tedros’ accusations.

“Taiwan has always opposed all forms of discrimination,” wrote Tsai, who invited the WHO chief to visit Taiwan to see “how committed the Taiwanese people are to engaging with and contributing to the world.”