PRAGUE — The list of Taiwan’s formal diplomatic ties in Europe is short: It begins and ends with the Vatican.

But the coronavirus pandemic, which has underscored the island’s isolation and sparked an escalating feud with the World Health Organization, may be opening up some diplomatic opportunities for Taipei.

“The European Union thanks Taiwan for its donation of 5.6 million masks to help fight the #coronavirus,” European Commission President Ursula von der Leyen tweeted on April 2. “We really appreciate this gesture of solidarity.”

Taipei has long been excluded from the international community at the behest of Beijing, which claims the island as a wayward province. This freeze-out includes the WHO, prompting loud complaints from Taipei.

Yet, Taiwan has also earned global respect for a rapid outbreak response that has kept its confirmed infections below 400 and its death toll at just six as of Sunday. Meanwhile, the crisis has had the opposite effect on China’s reputation. Its smoke screen in the early days of the outbreak in Wuhan has only deepened European distrust.

EU officials and analysts stress that governments are unlikely to switch recognition from China to Taiwan anytime soon. Some experts, however, see a possibility of more informal diplomacy with Taiwan in the months ahead.

Taiwan’s deal with the Czech Republic “will boost efforts to manage the COVID-19 pandemic through research and development of rapid testing kits, medicines, and vaccines,” a Taiwanese foreign ministry spokesperson told the Nikkei Asian Review. “Both sides will as well share key materials and best practices.” 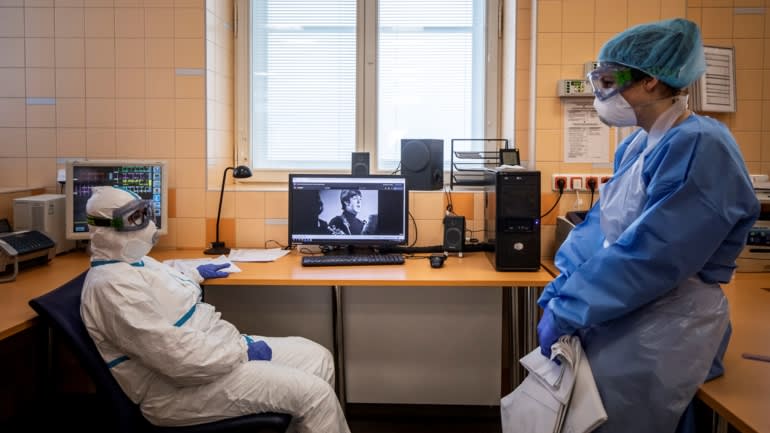 Hospital workers in Prague listen to The Beatles’ song “Help” during a break from treating coronavirus patients.

This open cooperation did not come out of nowhere. Over the past year, the “pro-Taiwan” mayor of Prague, Zdenek Hrib, has repeatedly rebuked Beijing for its human rights record and its claim of sovereignty over Taiwan under the “one China” principle.

In January, Hrib moved to replace Prague’s sister-city relationship with Beijing for one with Taipei.

And in March, Prime Minister Andrej Babis reportedly called on China to replace its ambassador, who had allegedly threatened businesses with retaliation if a senior Czech politician visited Taipei.

“The Czech Republic has been one of the avant-garde countries when it comes to pushing some politically sensitive issues related to China,” said Richard Q. Turcsanyi, program director at the Central European Institute of Asian Studies at Palacky University Olomouc, in the Czech Republic. “Although it has never recognized Taiwan diplomatically, it had long sustained very active and high-level links to the island.”

Jeremy Garlick, assistant professor of international relations at the University of Economics in Prague, reckons there will be “only isolated pockets of recognition for Taiwan.”

“Some politicians across Europe may seek to boost relations with Taiwan and downplay China’s role,” he added. “But this is not likely to be supported at the government level in the majority of countries.”

Still, others think European countries may be more inclined to work with Taiwan. They might not recognize its independence. But with carefully calibrated cooperation, they could send Beijing a strong message without — they would hope — jeopardizing the trade and investment Europe will need to recover from the looming global recession.

This approach would show “that for the EU and most Europeans, the Chinese Communist regime has become a problem and there are no more reasons and need to pretend to be friends and partners,” said Jean-Pierre Cabestan, a political science professor at Hong Kong Baptist University. “We are ‘systemic rivals’ and it is time to tell [China], and to carry it out in terms of policies.”

The European Commission itself used the term “systemic rival” to describe China in a March 2019 report. That same month, French President Emmanuel Macron declared that the “time of European naivete” toward China was over.

Skepticism of China in European capitals, driven by concerns over cyberspying, has hardened since the coronavirus epidemic began. Besides anger over its alleged cover-up of the initial outbreak, Beijing has not helped its cause by donating face masks the Netherlands said were faulty and test kits that Spain rejected as “substandard.” Medical supplies from China are unloaded in Madrid on April 5. Spain has complained about the accuracy of Chinese test kits.

In the U.K., a conservative think tank estimated that Group of Seven nations alone could sue China for 3.2 trillion pounds ($3.9 trillion) in damages, over breaches of international health regulations. Fifteen politicians from the ruling Conservative Party wrote to Prime Minister Boris Johnson to demand a “rethink and a reset” of relations with Beijing.

Exactly how much this resentment will help Taiwan remains to be seen.

As things stand, Taiwan maintains only unofficial diplomatic relations with 21 European countries, including the U.K., through “Taipei Economic and Cultural Representative Offices.” Twenty-five European states — mostly in the east and the Balkans — have no ties with Taiwan whatsoever.

France and the U.K. are typically supportive of Taiwan having more say on the international stage. But Germany, Europe’s largest economy and the key decider of EU policy, is more hesitant. In January, Chancellor Angela Merkel did not join her British and French counterparts in publicly congratulating Tsai on her re-election.

When asked about von der Leyen’s tweet, Virginie Battu-Henriksson, the EU spokesperson for foreign affairs and security policy, told the Nikkei Asian Review that it “does not constitute any change of the EU policy toward Taiwan. The EU maintains its “One China” policy: We recognize the government of the People’s Republic of China as the sole government of China.”

She added: “The EU promotes practical solutions regarding Taiwan’s participation in international frameworks wherever this is consistent with the EU’s “One China” policy and the EU’s policy objectives.”

There is little doubt that beating COVID-19 is a policy objective everyone shares.

European institutions are also engaging with Taiwan’s national research academy, Academia Sinica, on vaccine development. This came after similar teamwork between Taiwan and the U.S. prompted Beijing to lash out: The State Council’s Taiwan Affairs Office accused Taipei of a “despicable move and political plot to use the COVID-19 pandemic to achieve independence.”

Turcsanyi said it is uncertain how China will respond to European fine-tuning of positions on Taiwan. “Under normal circumstances, China would not want to undermine the relationship with one of its most important international partners,” he said of the EU. “However, Chinese diplomacy has been turning nationalistic in recent months and years, and I wouldn’t bet on China’s restraint.”

A lot will depend on how many European countries draw closer to Taipei, according to Mareike Ohlberg, an analyst at the Mercator Institute for China Studies in Berlin. If it is only a “smaller number, China may try to isolate and pressure these countries,” she said.

Taiwan, for its part, insists it is not looking for favors when it donates equipment or helps with research.

“The gifts are given with no strings attached,” the foreign ministry representative said. “There’s no political agenda. Taiwan did this because we have the capability to help others.”