TOKYO — The Tokyo Metropolitan Government plans to keep restaurants and pubs open with limited hours during Japan’s monthlong state of emergency, in an about-face prompted by pressure from the central government.

Prime Minister Shinzo Abe announced on Tuesday a state of emergency in Tokyo and six prefectures hit by a surge in coronavirus infections. But the capital and the central government have long engaged in a tug of war between curbing infections and limiting the economic impact.

Koike met with Yasutoshi Nishimura, the minister handling the nation’s coronavirus response, on Thursday night to bridge their differences.

“I believe I was able to share a sense of crisis with the central government,” Koike told reporters after the meeting. “We also agreed on the approach to curbing the outbreak.” 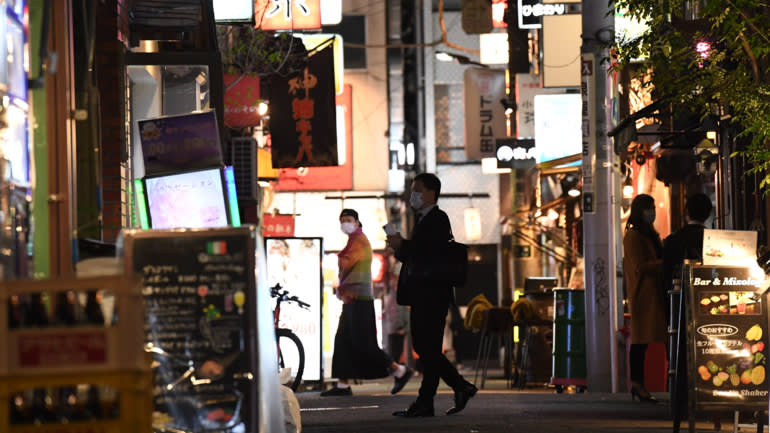 The Tokyo Metropolitan Government reversed earlier plans to ask restaunts and bars to close to fight the coronavirus epidemic, after the central government complained the move would fuel public anxiety. (Photo by Karina Nooka)

Under the new plan worked out so far, Tokyo will allow restaurants and izakaya pubs to offer alcohol until 7 p.m. and to stay open until 8 p.m.

Barber shops and hardware stores were originally on the list of business closures but will now be allowed to operate as essential services, along with baseball batting cages and golf driving ranges.

Department stores, also on the original closure lists, will be allowed to operate floors selling food, clothing and other daily necessities.

Pachinko parlors and internet cafes will be asked to close.

The metropolitan government is also considering offering compensation to businesses that adhere to its guidance.

The governor said Tokyo will implement measures based on the state of emergency legislation but declined to offer details, saying she will announced them Friday.

Eager to curb the growing number of infections, Tokyo had initially planned to ask a wide range of businesses to close, but the central government objected to the capital’s plan, citing huge repercussions for daily life and economic activity for the more than 9 million people who live there.

A day before the declaration, Koike said her “biggest goal is to protect lives,” adding that limiting the outbreak depends on the behavior of Tokyoites. She said she planned to ask certain businesses to close and would finalize the list after consulting with the central government.

The state emergency law gives local governments the authority to decide which businesses will be asked to close.

Policy guidelines issued by Abe’s government on Thursday calls for united action by the central government, localities and the public, including businesses. Swift decisions and thorough explanations to affected businesses are seen as crucial to ensuring the desired results from the emergency declaration.

The pace of infection has not slowed in Tokyo. Top officials from Tokyo, Kanagawa and seven other surrounding prefectures held a teleconference Thursday and issued a joint message asking residents to refrain from going out to reduce personal contact by 80%.