TOKYO — After Japanese Prime Minister Shinzo Abe declared a state of emergency over the new coronavirus on Tuesday and called for reduced people-to-people contact, the streets of Tokyo were far from deserted.

Unlike in Paris and some other cities, the declaration carries no provision that forces people to stay home. Rather, the prime minister is calling on the public to voluntarily refrain from going outside and work from home as much as possible.

As of Wednesday morning, however, the hoped-for 80% reduction of people on the streets has yet to be realized.

In Setagaya Ward, home to the largest number of confirmed coronavirus cases in the capital, people were carrying on more or less normally. Supermarkets, convenience stores, cafes and dental clinics were among the many businesses that remained open as of noon. Families were even picnicking in parks.

At one bento shop in the area, customers in masks were lining up to buy lunch with little regard to social distancing. 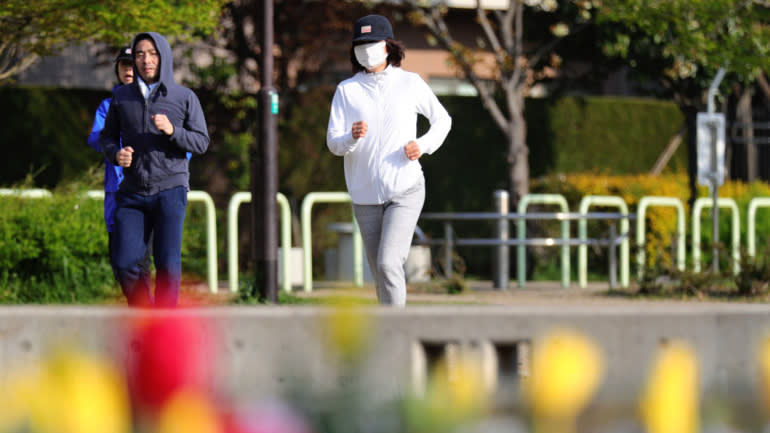 The scene was much the same in other parts of the city. “I’ve got a meeting today since I couldn’t arrange a teleconference,” said a businessman in the central district of Nihonbashi. One 75-year-old businessman said, “I work for a securities company, and I’m here to buy lunch.” He said his company had split into two groups, with each going to the office on alternate days.

The 80% reduction is based on calculations by Hokkaido University professor Hiroshi Nishiura, who is part of a government advisory panel. 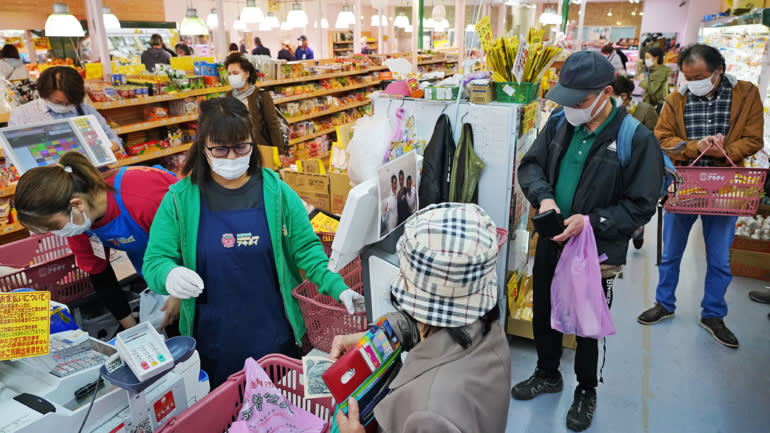 A Tokyo supermarket does brisk business a day after people were asked to remain at home as much as possible. (Photo by Kai Fujii)

Abe’s emergency declaration gives municipal authorities the power to enact measures on their own. But the government has not offered detailed guidance, leading to confusion and a lack of urgency.

Tokyo Gov. Yuriko Koike said on Tuesday night that the municipal government would release by Friday a list of businesses that it would like to see closed. The emergency declaration allows her to shutter schools and some companies, but she would have to discuss with the national government about how “to make [closures] effective and meaningful,” she said. 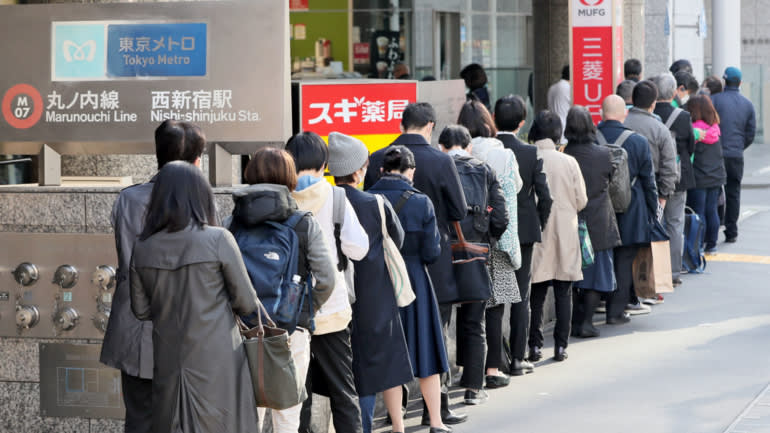 People lining up to buy masks in Tokyo on April 8 ignore accepted guidelines regarding social distancing. (Photo by Kei Higuchi)

“I haven’t received any updates [from the local government],” said a person working at a day care facility in Tokyo’s busy Chuo district. There have been reports that some day care facilities would close, or that only parents working in essential jobs would be able to use them. But on Wednesday, there was only one child absent at the facility.

Without clear directives from the government, the day care worker said she was unable to turn children away. She added that the facility is facing shortages of masks and sanitizers, both of which are essential when caring for young children.

Still, some businesses took matters into their own hands. Department store operators Matsuya and Isetan Mitsukoshi Holdings closed their stores while the popular Lumine shopping mall chain said it shuttered some locations despite the lack of government guidance.