NEW YORK/TOKYO — The U.S. government is boosting fiscal spending to cope with the novel coronavirus pandemic, leading to deteriorating fiscal conditions, with the debt to gross domestic product ratio expected to exceed that during World War II.

The theoretical rate of the yen will become 93 yen per dollar in contrast to the current 107.

The costs of anti-coronavirus measures by countries worldwide now total about $8 trillion, 9% of the world’s GDP. At a news conference by the International Monetary Fund on April 15, Vitor Gaspar, head of the IMF’s Fiscal Affairs Department, said, “Governments should do whatever it takes, but to keep the receipts,” advising them to verify the effectiveness of the measures.

Of the $8 trillion, $2.3 trillion comes from the U.S., sending the U.S. budget deficit and balance of government debt higher than during the 2008-2009 global financial crisis. The U.S. Federal Reserve is purchasing unlimited government bonds to support an increase in debt. The Fed has already purchased $1.3 trillion worth of bonds since it decided to resume quantitative easing on March 15. Yields on 10-year U.S. government bonds are currently hovering in the 0.6% range, the lowest levels on record.

If the government finances the $2 trillion economic package with 10-year bonds, annual interest payments will total $12 billion — a mere 3% of the interest paid in fiscal 2019.

The Fed’s move is similar to “monetization,” a term used when a central bank subscribes to government bonds. When Germany did the same during World War I and Argentina in the 1980s, their finances ballooned and confidence in their currencies cratered. The Fed is now embarking on fiscal policy widely considered “taboo,” as its assets are now rising much faster than those of the Bank of Japan and the European Central Bank. 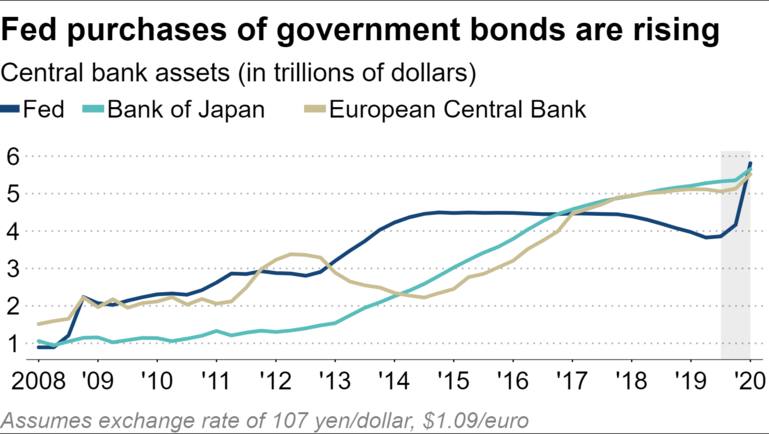 Olivier Blanchard of the Peterson Institute for International Economics said that “we see no reason to panic” as “the central banks are doing the right thing” and “their actions are sustainable.”

Still, there is growing alarm among investors about a weaker dollar.

Naoki Iwami, executive vice president of Whiz Partners, a Tokyo-based asset management company, noted that financial markets are and will continue to be awash with dollars. “It is impossible that after so many dollars have been printed, the dollar will continue to strengthen,” he said.

But when each country’s deteriorating fiscal conditions are factored into the theoretical value of the dollar, the yen-dollar rate reaches the 93-yen range. 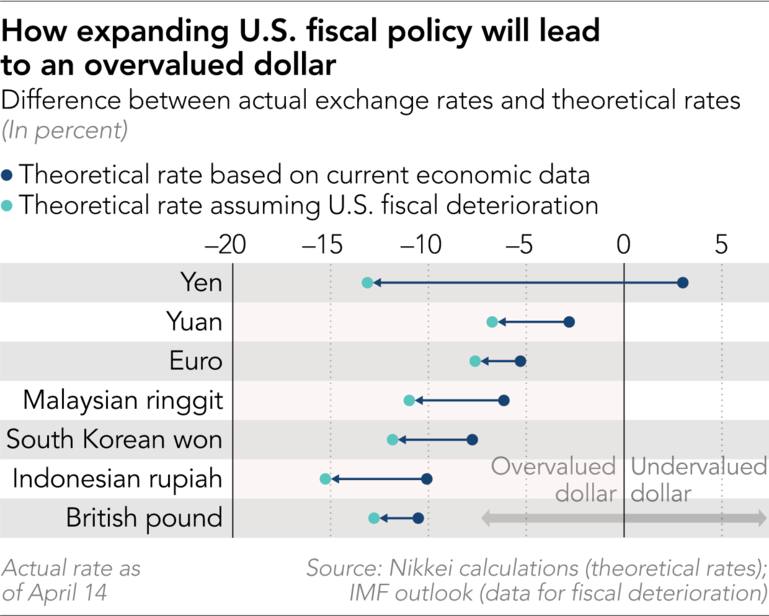 The credibility of the dollar depends on whether the massive fiscal stimulus can lead to a V-shaped recovery. If the contraction continues, the dollar and U.S. bonds will depreciate markedly.