NAGOYA, Japan/TOKYO — When reports of a mysterious pneumonialike illness first cropped up in China at the end of last year, Yutaka Tokue, head of the infectious disease and prevention division at Japan’s Gunma University, knew the disease would eventually arrive in his home country.

“We need to start finding a treatment,” Tokue told his colleagues.

The research team initially looked at three candidates, including an AIDS drug, that could possibly be applied to COVID-19, the disease caused by the novel coronavirus.

In the middle of February, as plans for clinical trials were being pushed forward, an unexpected patient was brought to Gunma University Hospital.

The patient had tested positive for the coronavirus on the cruise ship Diamond Princess, which was by then docked in Yokohama Port. Carrying about 3,700 passengers and crew from more than 50 countries and regions, the ship had become a hot-spot-on-sea for the new virus. 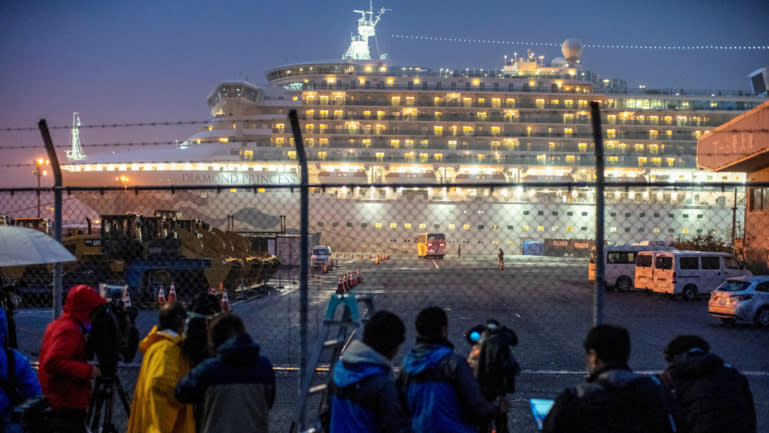 A bus arrives near the cruise ship Diamond Princess, where dozens of passengers were tested positive for coronavirus, at Daikoku Pier Cruise Terminal in Yokohama on February 16.

“Can you use Avigan?” said a member of the patient’s family, referring to an influenza drug developed by a Fujifilm Holdings affiliate.

There was talk coming out of China about Avigan’s effectiveness against the coronavirus. But the efficacy had yet to be proven, and there were competing reports of the pneumonia symptoms worsening under the experimental treatment.

But with the patient in critical condition, Gunma’s hospital staff decided in late February to start administering Avigan, along with other existing drugs. The virus disappeared from the patient.

Such trial-and-error approaches have been seen in hospitals and municipalities across Japan as it combats an invisible enemy that has infected more than 2,900 and killed at least 69 in the country. Hospital staff put on protective gear before tending to patients at a hospital in Tokyo.

“When will this end?” an exhausted nurse said to herself last week in the emergency care center of a Nagoya hospital, where a steady stream of suspected coronavirus patients — sometimes up to 10 a day — are brought in.

This is not one of the medical institutions designated by the Japanese government for infectious disease cases — which have the expertise to handle COVID-19 — but just an average hospital.

The facility has hastily set up makeshift wards for coronavirus cases, with tents containing air purifiers in the halls outside. After seeing these patients, doctors covered head to toe in protective clothing remove it in the tents before leaving.

Many patients ultimately test negative, but for health care workers unaccustomed to dealing with this sort of hazard, seeing just one such patient becomes cumbersome and stressful.

The facility has already gone through its stock of safety goggles and is running out of masks with no idea when the next shipment will come.

“I am very fearful about hospital‐acquired infection,” a nurse at a capital hospital said. “Recently, even standard precautions are at risk of being compromised,” she said, referring to practices that prevent the contact of blood and body fluids, of which masks play a crucial part.

In Tokyo’s Eiju General Hospital, near the landmark Ueno Zoo, over 100 cases of COVID-19 were confirmed as of March 30. That accounted for a fourth of the capital’s cases in one facility, strongly suggesting that in-house infections were spreading. More than a hundred positive cases for the coronavirus was confirmed at EItai Hospital in Tokyo’s Taito ward, strongly suggesting in-house spread.

Hospital staff have senior citizens and children in their homes. Fearing infecting loved ones, several staff have opted not to go home, instead sleeping in the hospital’s training ward.

Across the country, hospitals beds are beginning to fill up.

When multiple infections were confirmed on the cruise ship Diamond Princess, municipal governments near Yokohama scrambled to find hospitals to take the sick.

“We tried to coordinate with hospitals in nearby cities but everywhere was packed. It was chaos on the ground,” Jinichi Suzuki, head of a health center in Sagamihara, Kanagawa Prefecture, said.

Initially, patients on the Diamond Princess were only taken to designated hospitals. But as the number of infected patients grew, empty beds quickly disappeared.

On Feb. 9, the Ministry of Health, Labor and Welfare announced all hospitals would be able to administer to COVID-19 patients.  In the end, more than 700 Diamond Princess passengers who tested positive were dispersed to over 145 facilities in 16 prefectures.

Now doctors in small towns across Japan are on the front line of diagnosing potential cases.

“When your appointment time comes, please stay in your car or at home,” the clinic’s website advises. “We will phone you when your turn comes.”

The clinic has seen a rush of patients with fevers who are worried they may have COVID-19. None of the clinic’s patients have tested positive so far, but the facility has begun to designate different times for the doctor to see those with cold symptoms and those without.

“We are having to wash our protective gear with disinfectant and wearing it multiple times,” Dr. Makiko Fujikawa, the chief physician, said. “I had to use a special sterilizer for my mask and use it over two days.”